This year marks 1,600 years since what many posit was the “end of Roman Britain” based on a letter Emperor Honorius is said to have written in 410 AD telling Britain to look to its own defence. So we thought we’d take a look at Roman London – Londinium – in a short series running until the year’s end. 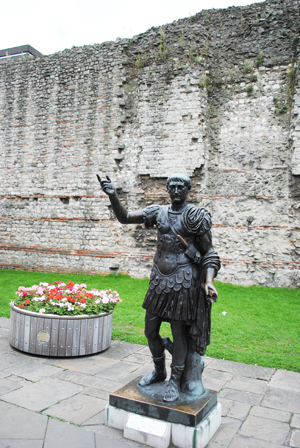 To kick it off, we’re taking a look at one of the easier to find Roman remnants, that of the city wall which encircled first Roman and later the medieval City of London.

Standing to a height of more than 35 feet or 10.6 metres, the Roman section extends as high as 14.5 feet or 4.4 metres with the upper part dating from later periods. The Roman wall would have originally been around 20 feet or 6.3 metres high and would have had a V-shaped ditch running along its outside.

First built around 200 AD, the city wall largely ran along the same course over the ensuing centuries. There were initially five gates with another added in the Roman period and another in medieval times. None of these now survive.

Further substantial remains of the Roman wall can be seen in a courtyard at nearby Cooper’s Row (head around the corner from Tower Hill tube station along Cooper’s Row and then turn right, past a hotel, into a courtyard) and on what was the north-west corner of the city at Noble Street, not far from the Museum of London, where a Roman base supports a later brick wall.