And so we’ve made it – the end of our year-long countdown of Exploring London’s most popular posts in honour of our 10th anniversary. And so, without any further ado, here’s the final two (and surprisingly, they both relate to the same fictional character)…

We hope you’ve enjoyed this look at where we’ve been and look forward to bringing you some exciting new stories as we continue to explore London’s history and culture in 2021!

We’ve finished our special looking at 10 fictional character addresses in London so here’s a quick recap of the series. We’ll be launching a new special series next week…

This is one property for which there is no ‘real’ address – 17 Cherry Tree Lane doesn’t exist except in the pages of PL Travers’ books about Mary Poppins (and the many subsequent adaptions including the famous 1964 musical film starring Julie Andrews and Dick Van Dyke). 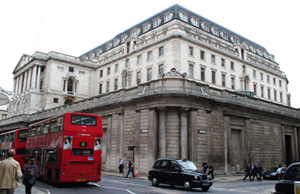 But we do know that the home of Mr and Mrs Banks – the couple who hired Ms Poppins as a nanny for their children Jane, Michael and baby twins John and Barbara – is believed to have been located somewhere in London – possibly somewhere to the north-west of the city close to The Regent’s Park and within an easy commute of the Bank of England (pictured) where Mr Banks worked.

While some of the locations featured in the book and the film – such as the Bank  and, of course, St Paul’s Cathedral (remember the lady who fed the birds?) – do exist – there is also at least one residential property related to Mary Poppins which does as well.

According to Ed Glinert, author of Literary London, the model for Admiral Boom’s house a little further along Cherry Tree Lane  – you may recall him firing his cannon on the 1964 film – can be found in Admiral’s Walk in Hampstead. The property was apparently once home to the nineteenth century architect George Gilbert Scott.