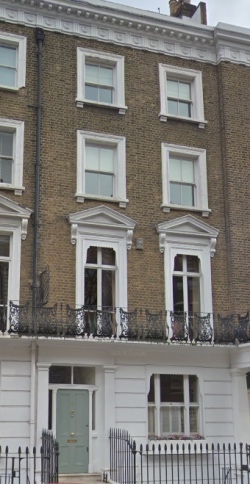 The Chelsea property where Jamaican singer-songwriter Bob Marley lived in 1977 has been given an English heritage Blue Plaque. Marley lived at the four storey terraced house at 42 Oakley Street while he and the Wailers were finishing recording their album Exodus which features hits including Jamming, Waiting in Vain, Three Little Birds and One Love. Marley, who often played football with bandmates at pitches in Battersea Park, said he regarded London as a “second base”. Among the evidence considered in deciding to award the plaque was Marley’s arrest for possession of cannabis on 10th March, 1977, along with bassist Aston ‘Family Man’ Barrett. Court records have Barrett’s address as 42 Oakley Street while Marley’s is recorded as 27 Collingham Gardens. Anecdotal evidence, however, suggests he gave this address to try and prevent the police from searching Oakley Street for drugs and English Heritage says the unanimous recollection of contemporary witnesses is that Oakley Street was both the band headquarters and Marley’s primary address at the time. Other music-related identities who have been honoured with blue plaques include Jimi Hendrix, John Lennon, George Frideric Handel and Wolfgang Amadeus Mozart. For more, see www.english-heritage.org.uk/visit/blue-plaques/. PICTURE: 42 Oakley Street (before plaque) via Google Maps.