• Paintings and drawings by Charlotte Bronte, the first of famous “little books” she ever made, and a pair of her ankle boots worn will go on show at the National Portrait Gallery on Monday. Celebrating Charlotte Bronte 1816-1855 is being held to mark the 200th anniversary of the author’s birth and features 26 items loaned from the Bronte Parsonage Museum in Haworth. As well as portraits from the gallery’s collection (including the only painted portrait of Charlotte), the display will also feature first editions of her novel Jane Eyre and Elizabeth Gaskell’s biography, Life of Charlotte Bronte, as well as chalk drawings George Richmond made of both women. The exhibition, which is free to enter, is in Room 24 and runs until 14th August. For more, see www.npg.org.uk. PICTURE: National Portrait Gallery, London.

• Find out what the buzz is all about in London this week when The Royal Park’s A Right Royal Buzz exhibition is held across three venues – Duck Island Cottage in St James’s Park, The National Gallery and the Mall Galleries. The community arts project features art created in a series of workshops under the guidance of artist Alex Hirtzel – all in a bid to teach the public about the importance of pollination. The installations a blacked out box in the Mall Galleries where you can discover how bees see, a room of 3D flowers at the National Gallery inspired by Van Gogh’s Sunflowers and Jan Van Huysum’s Flowers in a Terracotta Vase, and a four foot high beehive and bug hotel made of ceramic tiles on Duck Island in St James’s Park. For more on the project – which can only be seen until 20th February – see www.royalparks.org.uk/arightroyalbuzz.

• A recreation of Claes Jansz Visscher’s iconic 1616 engraving of London goes on show in the Guildhall Art Gallery from Saturday as part of commemorations of the 400th anniversary of William Shakespeare’s death. Artist Robin Reynolds has recreated the work and depicts London, reaching from Whitehall to St Katharine’s Dock, on four large plates. In recognition of the Shakespearean commemoration, the new drawing also features references to the Bard’s 37 plays, three major poetic works and sonnets. Visscher Redrawn: 1616-2016 can be seen until 20th November and is part of a full program of events being held as part of the commemoration (including the Shakespeare Son et Lumiére show in Guildhall Yard on 4th and 5th March). For more, see www.cityoflondon.gov.uk/visscher and www.cityoflondon.gov.uk/shakespeare400.

• The first major presentation of the art of Eugene Delacroix to be held in the UK in more than 50 years has opened at the National Gallery’s Sainsbury Wing. Delacroix and the Rise of Modern Art celebrates the career and legacy of the artist, arguably the most famous and controversial French painter of the late 19th century and one of the first “modern masters” yet whose name today is overshadowed by those of many of his contemporaries. The display features more than 60 works borrowed from 30 public and private collections around the world with highlights including Delacroix’s Self Portrait (about 1837), The Convulsionists of Tangiers (1838), and Bathers (1854) as well as works by other artists which pay tribute to the impact he had: among them, Bazille’s La Toilette, Van Gogh’s Pieta and Cezanne’s Battle of Love. Organised by the National Gallery in conjunction with the Minneapolis Institute of Art, the exhibition runs until 22nd May. Admission charge applies. For more, see www.nationalgallery.org.uk. 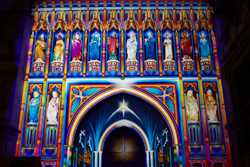 • The biggest ever light festival to hit London opens tonight. Lumber London, produced by Artichoke with the support of the Mayor of London and visitlondon.com, will see a host of international artists transform a series of iconic buildings and locations in four areas across the city – Piccadilly, Regent Street and St James’s, Trafalgar Square and Westminster, Mayfair and King’s Cross. The 30 installations include French collective TILT’s Garden of Light featuring giant illuminated plants in Leicester Square, Patrice Warrener’s The Light of the Spirit which envelopes the west front of Westminster Abbey in colour and light, Deepa Mann-Kler’s Neon Dogs – a collection of 12 neon dogs inspired by the balloon dogs seen at children’s parties, this sits near Trafalgar Square, and, Pipette, a colourful installation by Miriam Gleeman (of The Cross Kings) and Tom Sloan (of Tom Sloan Design) which sits in the pedestrian subway, the King’s Cross Tunnel. Other highlights include Julian Opie’s work Shaida Walking, 2015 which will be permanently located in Broadwick Street, Soho, and Janet Echelon’s enormous net sculpture 1.8 London which is strung between buildings at Oxford Circus. The festival runs from 6.30pm to 10.30pm over the next four nights. You can download a free map on the installations or use the free London Official City Guide app to locate them. For more information – including the full programme – see www.visitlondon.com/lumiere.

• A property deed signed by playwright William Shakespeare and one of the most complete first folios of his works have gone on show in the London Heritage Gallery at the Guildhall Art Gallery. Alongside the two documents which dates from 1613 and 1623, the Shakespeare and London exhibition marks the 400th anniversary of Shakespeare’s death – to be commemorated on 23rd April this year – will also display other documents related to the story of London’s playhouses. The property deed – which relates to a property in Blackfriars – is only one of six surviving documents to bear the playwrights authenticated signature while the first folio is one of five of the most complete copies in existence and is apparently usually only brought out for consultation by Shakespearean scholars and actors. The exhibition runs until 31st March. Admission is free. For more on it and other events being run to commemorate the Bard’s death, see www.cityoflondon.gov.uk/shakespeare400. For more on other events this year, check out www.shakespeare400.org.

• See your art featured in an upcoming exhibition on the importance of bees and pollination by attending a drop-in workshop at Victoria Tower Gardens next to the Houses of Parliament next week. The workshop, which will be held from 10am to 2pm on 20th January, will see participants create their own 3D flowers based on famous paintings by Vincent Van Gogh and Jan Van Huysum currently in The National Gallery’s collection – all as part of a focus looking at what plants bees are attracted to. The art created in the workshop will be seen in an exhibition A Right Royal Buzz which is the result of a collaboration between The Royal Parks, The National Gallery and Mall Galleries and will be seen across all three venues (Victoria Tower Gardens representing the Royal Parks) from 17th t0 20th February. For more, head to this link.