This triple-monikered church was first recorded in the 1200s. Far from unique in its dedication to the Archangel St Michael (there were apparently seven churches which were dedicated to him before the Great Fire), it was distinguished from the others by the name Paternoster Royal. 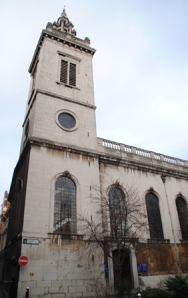 Surprisingly, the name has nothing to do with royalty or the clergy, at least not directly. The name Paternoster comes from the church’s location on what was Paternoster Lane (it’s now College Hill) – it was named for the number of paternoster or rosary seller that were based there.

The name Royal, meanwhile, is a little bit more obscure. First applied in the 1300s, it apparently comes from the close proximity of another street called Le Ryole which was itself a corruption of the French town of La Reole in the wine districts near Bordeaux. The street is believed to have been given the name thanks to the number of wine merchants who traded there.

Like other London churches, this one has been rebuilt several times – notably after the Great Fire of London (to the designs of Sir Christopher Wren) and again after World War II during which the church was all but destroyed by a V1 flying bomb. Since its reopening in 1968 it has served as the international headquarters of the Christian organisation, the Mission to Seafarers, which supports chaplains working in ports around the world.

The walls date from Wren’s time and the stone steeple, which wasn’t completed until 1717, is the work of Nicholas Hawksmoor. The interior features carved figures of Moses and Aaron which stand before the reredos – these apparently came from All-Hallows-the-Great (demolished in 1894) as did the chandelier which bears the words ‘Birmingham 1644’).

High profile parishioners over the years have included the four time Lord Mayor of London, Dick Whittington (see our earlier post on him) – he paid for a substantial extension of the church and founded a college of priests there (it’s from this college, which was dissolved in the mid-1500s and then re-established soon after, that College Hill is believed to have derived its name) as well as an almshouse next door.

Whittington and his wife were both buried inside but he was apparently exumed since several times and the location of his body is now unknown. There’s a stained glass window depicting Whittington and his famous cat inside and the gardens just outside also bear his name.