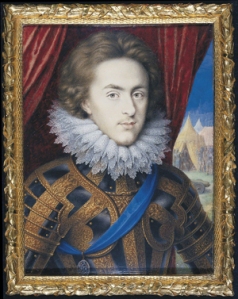 • The first ever exhibition focusing on Henry Stuart, older brother of King Charles I, has opened at the National Portrait Gallery. The Lost Prince: The Life and Death of Henry Stuart features more than 80 exhibits including paintings, miniatures, manuscripts, books and armour gathered from museums and personal collections around the UK and abroad – with some of the objects being displayed in public for the first time. Opened on 18th October – the 400th anniversary of the Prince’s death, among the paintings displayed in the exhibition are works by Holbein, Nicholas Hilliard and Isaac Oliver as well as Robert Peake as well as masque designs by Inigo Jones and poetry  by Ben Jonson. Henry, Prince of Wales, was the eldest son of King James I and Queen Anne of Denmark, and died at the age of 18 of typhoid fever. As well as looking at his short life, the exhibition covers the extraordinary reaction to his premature death (and the end of hope that King Henry IX would sit next upon the throne). The exhibition runs until 13th January. An admission fee applies. For more, see www.npg.org.uk. PICTURE:  Henry, Prince of Wales by Isaac Oliver, c. 1610-12; Copyright: The Royal Collection Photo: Supplied by Royal Collection Trust / © HM Queen Elizabeth II 2012

• The Lord Mayor’s Show – the largest unrehearsed procession in the world – will be held on 10th November. This year’s procession – celebrating the election of the 685th Lord Mayor of London, Alderman Roger Gifford – will feature more than 6,500 people winding their way through the City of London in a three-and-a-half mile-long display including 22 marching bands, 125 horses, 18 vintage cars, 21 carriages, an original American stagecoach, a Sherman tank, a steamroller and a Japanese Taiko drum band. While there will be no fireworks after this year’s parade, following the success of last year’s trial there will be an early morning flotilla with the Lord Mayor conveyed in the barge QRB Gloriana from Vauxhall up the Thames to HMS President, just below St Katharine Docks, from where he will make his way to the Mansion House to join the procession as it heads first to St Paul’s and then on to the Royal Courts of Justice before returning (via a different route). There are no grand stand seats left but plenty of places you can watch it for free (for a chance to win free Grandstand tickets, head to the Lord Mayor’s Show Facebook page and ‘like’ it). We’ll be talking about this more next week, but in the meantime, for maps and details of a new smart phone app, head to www.lordmayorsshow.org.

• Two prehistoric Japanese pots have gone on display at the British Museum. Loaned from the Nagaoka Municipal Science Museum, the pots date from the Middle Jomon period (3,500-2,500 BCE) and consist of a ‘flame’ and a ‘crown’ pot which were excavated in Nagaoka city. The pots form part of the Asahi Shimbun Displays in room 3 and will be there until 20th January. Meanwhile, continuing the Asian theme, an exhibition of more than 100 contemporary carved Chinese seals by artist Li Lanqing is on display in room 33 until 15th January. Admission to both is free. For more, see www.britishmuseum.org.

• On Now: Seduced by Art: Photography Past and Present. The National Gallery’s first major exhibition of photography, the display looks at the relationship between historical paintings and photography, both its early days in the mid-19th century and the work of contemporary photographers – in particular how photographers have used the traditions of fine art to “explore and justify” their own works. Almost 90 photographs are displayed alongside a select group of paintings for the show. Admission is free. Runs until 20th January in the Sainsbury Wing. For more, see www.nationalgallery.org.uk.