A nickname for the Yeoman Warders of the Tower of London, its origins are somewhat obscure but apparently related to a penchant for beef and was presumably meant as an insult (hence they prefer being called by their proper title). It was apparently first used of the English population in general and is said to have first been applied to the Yeoman Warders in the second half of the 17th century.

The Chief Yeoman Warder is their commander and second-in-command is a Yeomen Gaoler (who still carries an axe on state occasions). There are also three Sergeant Yeoman and a Yeoman Ravenmaster. A Yeoman Warder (along with a detachment of soldiers) carries out the Ceremony of the Keys every night – formally locking the Tower.

These days (drawing on innovations introduced by the Duke of Wellington when he was Constable of the Tower between 1826 and 1852), the Yeoman Warders must be warrant officers who have served at least 22 years (and have been awarded the long service and good conduct medal) in the British Army, Royal Air Force and Royal Marines.

The Yeoman Warders – and there were 38 (although we’re not sure how cutbacks due to COVID may affect this) – live within the Tower under the authority of the Resident Governor. They wear the red state dress uniform on state occasions and a dark blue “undress” uniform for everyday use. Moira Cameron became the first female Yeoman Warder in 2007.

As well as carrying out state duties, since Victorian times the Yeoman Warders have conducted towers of the Tower and assisted visitors with their inquiries. 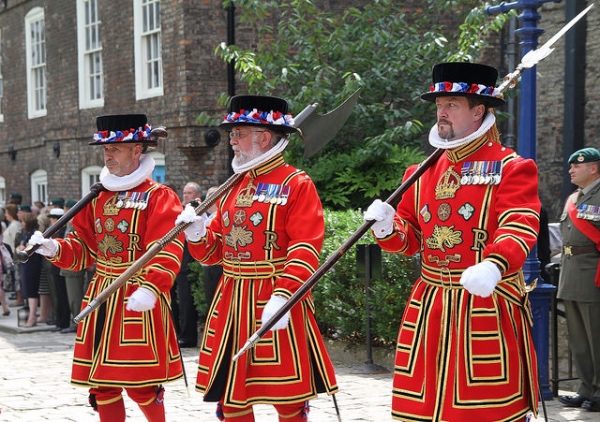 Commonly known as Beefeaters (more on that in a moment), the Yeoman Warders have long been a presence at the Tower of London.

The Yeomen Warders, more properly known as the ‘Yeomen Warders of Her Majesty’s Royal Palace and Fortress the Tower of London, and Members of the Queen’s Body Guard of the Yeoman Guard Extraordinary’, are a distinct detachment of the Yeomen of the Guard.

With a history stretching back to at least the reign of King Edward IV (1461-83), they have formed the Royal Bodyguard since at least 1509.

The Warders are nicknamed ‘Beefeaters’, it is thought, due to the fact their privileged position meant they could eat as much beef as they liked from the King’s table.

These days, Yeoman Warders, most of whom live in the Tower with their families (part of their job has always been to guard the Tower at night), must have served in the armed forces for at least 22 years, have reached the rank of warrant officer, and been awarded the Long Service and Good Conduct Medal (the current warders have served in Northern Ireland, during the Falklands War, in Bosnia, in the first and second Gulf conflicts and in Afghanistan).

There are usually around 40 Yeoman Warders at any one time under the command of four Yeoman Serjeants and a Chief Yeoman Warder (currently Alan Kingshott). They wear age dark blue and red undress uniform for everyday duties but also have a state dress uniform featuring the familiar heavy red coat (pictured above).

The first female to be appointed to the role of Yeoman Warder was Moira Cameron in 2007. The most recent person to join the Yeoman Warders is Gary Burridge who did so in August following 32 years in the Royal Navy.

One of the Yeoman Warders – currently Chris Skaife – serves in the role of Ravenmaster of the Tower of London and has the responsibility of caring for the tower’s famous ravens (important because, so they story goes, should the ravens ever leave the tower, the White Tower will fall and disaster will befall the kingdom). Other specialist roles include that of Yeoman Clerk.

Upon joining the Yeoman Warders, the new warders take an oath of allegiance (believed to date back to 1337) after which they drink a toast of port served in an 18th century pewter bowl.

Yeoman Warders, as well as participating in ceremonial duties like the daily Ceremony of the Keys and the annual Ceremony of the Constable’s Dues, they also take tours of the Tower of London.

PICTURE: Yeoman Warders at the Ceremony of the Constable’s Dues, 2014 (Peter Rowley/Flickr/CC BY 2.0)