Still the address to have in London, the origins of the name Mayfair are just as they appear – this area to the west of the City was named for the annual May Fair which was held at what is now the trendy (and picturesque) cafe precinct of Shepherd Market during the late 17th and early 18th centuries. 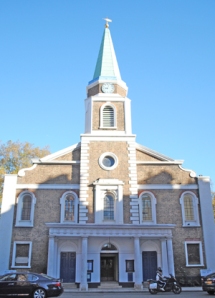 The two week long annual fair was established by King James II as a cattle market on what was then known as Brookfield Market in the 1680s. Attracting other pleasure-related activities, it soon became known for its licentiousness and, having survived Queen Anne’s attempts to have it banned, was eventually stopped in the mid-1700s. Edward Shepherd, who today gives his name to the area on which Brookfield Market once stood, was an architect and developer who subsequently redeveloped the site.

These days Mayfair is generally taken to encompass an area bordered by Hyde Park to the west, Oxford Street to the north, Piccadilly to the south and Regent Street to the east. The area’s development really took off in the century following the mid 1600s (landowners included the Grosvenor family – whose name is reflected in landmarks like London’s third largest square Grosvenor Square and Grosvenor Chapel (pictured) – as well as the Berkeleys and Burlingtons) and it became a favored residential location among the wealthy – indeed, it was this very gentrification which indirectly put an end to the fair.

Today, as well as being known for high end residential real estate, it’s one of London’s most expensive shopping precincts. Landmark buildings in the area today include the hulking bulk of the US Embassy at the western end of Grosvenor Square, the Royal Academy of Arts in Piccadilly, the Handel House Museum (located in what was the home of composer George Frideric Handel), shopping arcades such as the Burlington and Royal Arcades, and various luxury hotels like Claridge’s and The Dorchester in Park Lane.