One of 12 casts made of an original which stands in Calais, France, this sculptural group commemorates one of the most poignant moments of the bloody Hundred Years War. 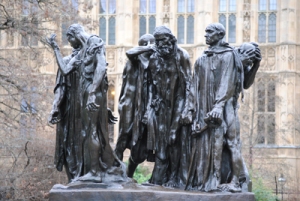 The original work, by the renowned Auguste Rodin who beat five others with his design, was completed in 1889 and stands outside Calais’ town hall. This cast was produced in 1908 and presented to the nation in 1914 by the National Art Collections Fund. It stands in Victoria Tower Gardens, just to the south of the Houses of Parliament in Westminster.

The sculpture commemorates an event which took place in 1347. Calais, then, as now, an important French port, had been besieged by the English for more than a year and, in a desperate situation as the townspeople starved (and despite orders from the French King Philip IV to hold out), the city authorities were seek terms from the English king, Edward III, still flushed with the success of the Battle of Crecy the year before.

Edward’s conditions for their surrender were harsh – six of the city’s leaders had to be handed over and the rest of the city would be spared. But more than that, the six had to leave the city stripped of almost all their clothes, wearing nooses around their necks and carrying the keys to the city and castle.

Six burghers, led by Eustache de Saint Pierre and also including John Daire and brothers James and Peter Wisant, did so and it is the scene of them making their way to King Edward that Rodin has captured. Their bravery was rewarded – while King Edward apparently order them to be beheaded, his pregnant English Queen, Philippa of Hainault, intervened on their behalf and they were spared execution, dressed and fed before they were safely escorted away.

Only 12 casts of the group were ever permitted under French law – the London cast was the third to be made.