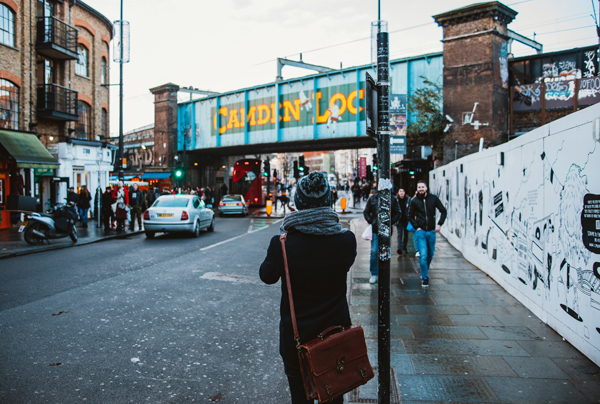 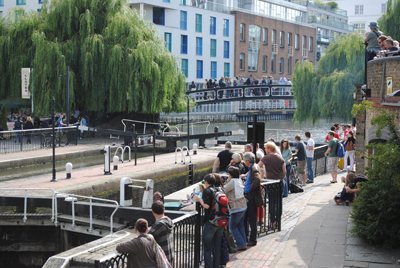 As with so many London locations, the name Camden Town comes from a previous landowner – but more indirectly it originates with the great 16th and 17th century antiquarian and topographer William Camden.

The story goes like this: late in his life William Camden – author of Britannia, a comprehensive description of Great Britain and Ireland – settled near Chislehurst in Kent on a property which became known as Camden Place.

In the 18th century, the property came into the possession of Sir Charles Pratt, a lawyer and politician (among other things, he was Lord Chancellor in the reign of King George III), who was eventually named 1st Earl of Camden.

It was Pratt who, having come into the possession of the property by marriage, in about 1791 divided up land he owned just to the north of London (which has apparently once been the property of St Paul’s Cathedral) and leased it, resulting in the development of what became Camden Town (Pratt, himself, meanwhile, is memorialised in the name of Pratt Street which runs between Camden High Street and Camden Street).

In 1816, the area received a boost when Regent’s Canal was built through it – the manually operated, twin Camden Lock is located in the heart of Camden Town.

Although it has long carried a reputation of one of the less salubrious of London’s residential neighbourhoods (a reputation which is changing), Camden Town is today a vibrant melting pot of cultures, thanks, in no small part, to the series of markets, including the Camden Lock Market, located there as well as its live music venues.

Past residents have included author Charles Dickens, artist (and Jack the Ripper candidate) Walter Sickert, a member of the so-called ‘Camden Town Group’ of artists, and, in more recent times, the late singer Amy Winehouse.

Of course, the name Camden – since 1965 – has also been that of the surrounding borough.

We’ll kick off this week with just a few more of the plethora of Olympic-related events which are happening around town:

• Tower Bridge, site of some spectacular fireworks last Friday night, is currently hosting an exhibition celebrating the 26 cities which have hosted the modern Olympics. Cities of the Modern Games, located on the bridge’s walkways, runs alongside an interactive exhibition looking at the bridge’s construction. Follow the link for details.

• The Guildhall Art Gallery is showcasing sculpture and art inspired by sport and the “Olympic values”. The art works are all winning entries from a contest organised by the International Olympic Committee. The chosen works were selected from among 68 submissions made by an international jury. Follow the link for details.

• The Design Museum is hosting a new exhibition celebrating the nexus between sport and design. Designed to Win looks at everything from the design of F1 cars to running shoes, bats and bicycles and explores the way in which design has shaped the sporting world. Runs until 9th September. Admission charge applies. See www.designmuseum.org.

• The London Metropolitan Archives is holding an exhibition of playing cards featuring an Olympic theme. Sporting Aces – Playing Cards and the Olympic Games features cards drawn from the collection of the Worshipful Company of Makers of Playing Cards which have an Olympic theme. Admission is free. Runs until 13th September. See www.cityoflondon.gov.uk/lma.

And in other news…

• A night market has been launched at Camden Lock over the summer period. Street food stalls and vintage fashion, arts and crafts and book shops will be open until 10pm every Thursday with extras including live music and film screenings. For more, see www.camdenlockmarket.com.

• On Now: Another London: International Photographers and City Life 1930-1980. This exhibition at Tate Britain in Millbank features more than 150 classic photographs of the city and its communities by foreign photographers including such luminaries as Henri Cartier-Bresson. The exhibition features iconic works such as Robert Frank’s London (Stock Exchange) 1951, Cartier-Bresson’s images of King George VI’s coronation, Elliot Erwitt’s depiction of a rain-washed London bus stop, and Bruce Davidson’s image of a child with pigeons in Trafalgar Square alongside works such as Wolfgang Suschitzky’s images of working class families in the East End, from the 1940s, and Karen Knorr’s images of punks in the 1970s. The photographs all come from the Eric and Louise Franck London Collection, which includes more than 1,200 images of London and has been promised as a gift to the Tate. Runs until 16th September. Admission charge applies. See www.tate.org.uk.

Have we missed something we should be telling others about? Send details in an email to exploringlondon@gmail.com.

Opened in 1820 as a link between the Grand Junction Canal and the London docks in the east, Regent’s Canal remains a terrific way to see another, oft forgotten (at least in visitor terms), part of the city.

Once at the heart of London’s goods transportation system, the canal is now a recreational and residential precinct. There’s a terrific tow path which runs between Camden Lock, home of great markets including terrific food, and the pool of Little Venice in Paddington – taking in Regent’s Park, canal-side mansions, and the London Zoo along the way.

If you don’t want to walk, you can take a boat trip (among those offering trips between Little Venice and Camden Lock are the London Waterbus Company and Jason’s Trip; for kayaking, see Thames River Adventures) along largely the same route (although the tow path takes you over the top of Maida Hill while the boats head through a tunnel underneath).

John Nash, designer of Regent’s Park, was one of the proponents of the canal seeing it as nice addition to his park (he apparently originally wanted the route to run through the park but was convinced otherwise thanks to some fears over the language of those involved in steering boats along the canal).

He become one of the directors of the company which developed the canal following the passing of an act of parliament in 1812. It was named for the then Prince Regent, later King George IV.

You can find out more about the history of the canal at the London Canal Museum, located further to the east on the Regent’s Canal between St Pancras Lock and the Islington Tunnel.

WHERE: While the canal runs to the docks, the journey from Camden Lock to Little Venice is a walk of around 5 kilometres. Nearest tube stations are Warwick Avenue at the Little Venice end and Camden Town at the Camden Lock end; WHEN: Daily, tow path is open from dawn to dusk between Camden Lock and Little Venice (see the boating company websites for trip times); COST: The tow path is free, one way trips on boats between Little Venice and Camden Lock start at around £6.50; WEBSITE: For more on the history of the Regent’s Canal, see www.canalmuseum.org.uk/history/regents.htm.