Described by the Theatres Trust as a “key building” in music hall history, the Canterbury Music Hall was first erected in Westminster Bridge Road in 1852 on the site of an old skittles alley which had been attached to the Canterbury Tavern. 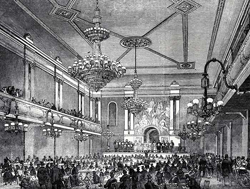 It was the tavern owner, Charles Morton, who erected the building which he apparently paid for out of the profits he made on selling drink while offering the entertainment for free.

Morton built upon the “song and supper room” tradition by employing a resident group of singers and such was its popularity that only a couple of years after the doors to the first hall opened, Morton was able to build a second, much larger music hall on the same site complete with a grand staircase, supper room and art gallery as well as seating for some 1,500 people.

Among stars to perform there was French acrobat Charles Blondin, who apparently made his way across the hall on a tightrope tied between the balconies.

In 1867 William Holland took a lease from Morton and the programmes then began to move away from the light music and ballads it was known for toward a more varied program with comedy prevailing. The art gallery was converted into a bar and a proscenium stage may have been added at this time.

RE Villiers took over management in 1876 and the building was again largely rebuilt – this time as a three tier theatre with a sliding roof. The venue hosted regular ballet performances and these proved popular with royalty – the Prince of Wales (later King Edward VII) was said to be a regular patron. The interior was again remodelled, this time with an Indian theme, in 1890.

The decline of the popularity of music halls saw it start to show films from 1914 and eventually to become a dedicated cinema. It survived until it was destroyed during a World War II bombing raid in 1942.

PICTURE: A print showing the hall after its 1856 rebuild (via Wikipedia)