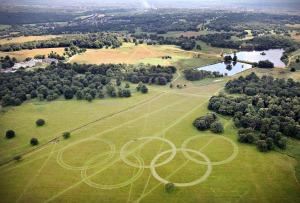 • The largest official Olympic Rings were unveiled at Richmond Park National Nature Reserve in London’s south-west this week, having been mown into the grass by the Royal Parks’ shire horses. The rings, which lie on Heathrow’s flight path and are 300 metres wide and more than 135 metres tall, will welcome athletes as they fly in to compete in the Games which kick off later this month. It took six shire horses to create the giant rings – which represent five continents – but they’ll be maintained by just two – Jim and Murdoch. Horses have worked in Richmond Park since as far back 1637 when King Charles I had the park enclosed as a royal hunting ground. Eleven Olympic events will be held on Royal Parks during the Games including road race cycling in Richmond Park. For more on Richmond Park, see www.royalparks.org.uk/parks/richmond-park. PICTURE: LOCOG.

• Almost 50 vehicles, ranging from handcarts to horse drawn carriages, steam powered vehicles to a new London bus, took part in the Worshipful Company of Carmen’s traditional ‘Cart Marking’ procession through the City of London yesterday. The ‘trade’ of carmen dates back to the 13th century when City authorities passed a bye-law controlling carters. At the ceremony, the carmen bring a variety of vehicles which are branded by placing a red hot iron on a wooden plate, with the year letter and the car number, in the continuation of an ancient tradition. The Worshipful Company of Carmen is said to be the oldest transportation organisation in the world. For more on the livery company, see www.thecarmen.co.uk.

• The late athletics coach Scipio Africanus “Sam” Mussabini (1867-1927) was honored this week with the unveiling of an English Heritage Blue Plaque at his former home in Herne Hill in London’s south. Mussabini, whose role in helping 100 metre sprinter Harold Abrahams win gold at the 1924 Olympics was depicted in the film Chariots of Fire (he was played by Ian Holm),  lived at the house at 84 Burbage Road from 1911 to about 1916. It backs onto the Herne Hill Stadium where he worked as a cycling and athletics coach from the 1890s, a period during which he trained several medal-winning Olympic athletes. All up, Mussabini’s runners won a total of 11 Olympic medals including five golds, between 1908 and 1928. For more, see www.english-heritage.org.uk.

On Now: Double Take: Versions and Copies of Tudor Portraits. This display at the National Portrait Gallery features five pairs of nearly identical Tudor portraits and explores how and why they were made. Among the portraits from the gallery’s collection on display are those of King Henry VIII, his wife Anne Boleyn, Archbishop William Warham, the merchant Thomas Gresham and Lord Treasurer Thomas Sackville – all of which are paired with paintings on loan from other collections. Admission is free. Runs until 9th September. For more information on the Making Art in Tudor Britain research project – of which this is a part – see www.npg.org.uk/research/programmes/making-art-in-tudor-britain.