Wilton’s Music Hall  seems to be regularly making news these days so the revelation that it’s London’s oldest (in fact, according to the venue’s website, it’s the oldest surviving grand music hall in the world) probably comes as no surprise. 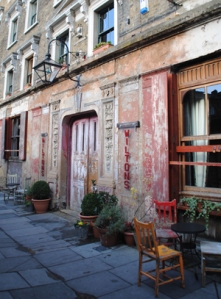 The hall, located in Graces Alley, Whitechapel, started out life as a pub which stood in the middle of a row of terrace houses. Named the Prince of Denmark, it is said to have had the first mahogany counters in London (hence the ‘Mahogany Bar’ at the front of the music hall today) and incorporated a concert room built at the rear of the ground floor.

The building was taken over by John Wilton in the 1850s. He also bought up the neighbouring terrace homes and subsequently built the grand music hall which still stands today – one of what were then a new generation of large music halls which appeared in London in the mid to latter part of the 19th century but had all but disappeared by 1900.

Wilton’s Music Hall opened on 27th March, 1859, and continued to operate under Wilton’s management for the next couple of decades. In 1877 it was badly damaged in a fire an rebuilt the following year.

Ten years later, however, the Wesleyan Mission took over the building and used it as a hall – dockers were served meals here during their first ever strike in 1889, it was used as a safe house during the so-called Battle of Cable Street of 1936 in which police clashed with protestors opposing a march by the British Union of Facists, and during World War II it was used as shelter for people bombed out of their homes.

The Methodists left in the 1950s and in 1964, the building was scheduled for demolition. Thanks to the intervention of poet John Betjeman, however (he led a campaign to prevent its destruction), the hall was saved. While it’s been undergoing restoration work ever since, more work is still required and the hall is still looking for donations to help fund it.

As well as operating once again as a music venue, it has since appeared in numerous films including Chaplin, The Krays, and the latest Sherlock Holmes film – Sherlock Holmes: A Game of Shadows.

There is a more detailed history of Wilton’s Music Hall at www.arthurlloyd.co.uk/Wiltons.htm, a music hall and theatre site. Wilton’s website can be found here.