The Tower Hill Memorial was originally built to commemorate those of the Merchant Navy and fishing fleets who died at sea in World War I and was later expanded to include those who died in World War II. 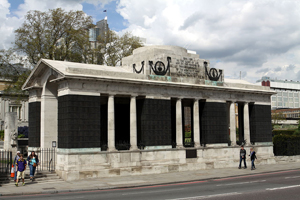 Located in the south-west corner of the garden in Trinity Square, the part of the memorial relating to World War I has the form of a 20-plus metre long vaulted corridor inside of which are a series of bronze plaques engraved with the names of 11,919 people whose grave was the sea.

Designed by Sir Edwin Lutyens and featuring sculptures by Sir William Reid-Dick, the Portland Stone memorial was unveiled on 12th December, 1928, by Queen Mary. The names are placed alphabetically under the names of their ships with the skipper or master the first name.

Located to the north of the original monument, the World War II extension, which was unveiled by Queen Elizabeth II on 5th November, 1955, takes the form of a semi-circular sunken garden and features the names of almost 24,000 seamen who died in World War II. It was designed by Sir Edward Maufe with sculpture by Charles Wheeler.

The memorial’s register is located inside nearby Corporation of Trinity House office (Cooper’s Row entrance).