• The ‘secrets’ of the Cheapside Hoard – the world’s finest and largest collection of 16th and 17th century jewels – are revealed in a new exhibition opening tomorrow at the Museum of London. The

Cheapside Hoard: London’s Lost Jewels publicly displays the hoard of Elizabethan and early Stuart jewellery and gemstones in its entirety for the first time since its discovery more than 100 years ago. The hoard, consisting of as many as 500 pieces including rings, necklaces, cameos, scent bottles and a unique Colombian emerald watch, was discovered buried in a cellar on Cheapside in the City of London in 1912. The exhibition uses new research and state-of-the-art technology to showcase the hoard as it explores the questions of who owned the hoard, when and why was it hidden, and why was it never reclaimed. New information revealed by the research shows that the hoard was buried between 1640 and 1666 (the critical clue was a previously overlooked intaglio – a gemstone engraved with the heraldic badge of William Howard, Viscount Stafford, who lived between 1612-1680). It also reveals Thomas Sympson was the “dodgy” jeweller responsible for two counterfeit rubies contained within the hoard (he apparently had a trade in selling counterfeit gems for as much as £8,000 each). Entry charge applies. Runs until 27th April. For more, see www.museumoflondon.org.uk.  PICTURED: Above: gold and pearl cage pendants from the Cheapside Hoard; and right: a bejewelled scent bottle.

• A previously unknown painting of Queen Elizabeth I is on display as part of a new exhibition, Elizabeth I and Her People, opening at the National Portrait Gallery today. The small painting, which has been attributed to miniaturist Isaac Oliver and which is a reworking of the classical story of the Judgement of Paris, was recently acquired by the gallery. It will sit among a selection of other portraits of the “Virgin Queen” in a display which endeavours to show how during her 50 year reign she portrayed the image of a strong monarch. The portraits are just some of the 100 items featured in the exhibition which also includes costumes, coins, jewellery and crafts and examines the rise of new social classes in Elizabethan society. Other portraits in the exhibition feature images of courtiers such as William Cecil and Christopher Hatton along with images of merchants, lawyers, goldsmiths, butchers, calligraphers, playwrights and artists. There is also a little known painting of three Elizabethan children and what may be the first portrait of a guinea pig. The exhibition, supported by the Weiss Gallery, runs until 5th January. Admission charge applies. For more, see www.npg.org.uk.

• Printed objects including replacement body organs, aeroplane parts and a music box have gone on display at the Science Museum in South Kensington as part of a new exhibition, 3D: printing the future. The exhibition looks at the rapidly evolving field of 3D printing and its growing impact on society through stories such as the use of 3D printing by engineers to create lighter aeroplane parts and the ways in which the medical industry is researching the use of the technology to create replacement body parts. The display will also include miniature 3D printed figures created from scans of visitors who took part in workshops during the summer holidays. This free exhibition runs in the Antenna gallery for nine months. For more, see www.sciencemuseum.org.uk.

• On Now: Facing the Modern: The Portrait in Vienna 1900. On at the National Gallery, the first major UK exhibition devoted to the portrait in Vienna features iconic works by Gustav Klimt, Egon Schiele, Richard Gerstl, Oskar Kokoschka and Arnold Schonberg alongside those of lesser known artists such as Bronica Koller and Isidor Kaufmann. Highlights include Klimt’s Portrait of Hermine Gallia (1904) and Portrait of a Lady in Black (about 1894), Schiele’s The Family (Self Portrait) (1918) and Nude Self Portrait by Gerstl (1908). Runs until 12th January. Admission charge applies. For more, see www.nationalgallery.org.uk.

Stay tuned – we’re launching our new Wednesday series next week. In the meantime, here’s a link to our 10 most viewed posts on Exploring London for the first quarter of this year (counting backwards from 10)…

2. Treasures of London – The Cheapside Hoard

And so we come to it – the most popular posts on Exploring London this year – one of which is perhaps surprising, the other of which not!

2. Treasures of London – The Cheapside Hoard: A look at the “greatest find of Jacobean and Elizabethan jewellery ever made”, much of which is now held at the Museum of London;

1. The Royal Wedding – Eight curious facts about Royal Weddings past and present: Perhaps not a surprising winner, given the worldwide interest in 2011’s Royal Wedding, this post looked at some of the stranger facts surrounding royal weddings in Britain in the relatively recent past.

And that brings our countdown to an end. Our usual coverage resumes next week…

It’s been described as the greatest find of Jacobean and Elizabethan jewellery ever made – an extraordinary cache of some 500 gemstones, jewellery and other related items found buried under the floor during the demolition of a building at 30-32 Cheapside on 18th June, 1912. 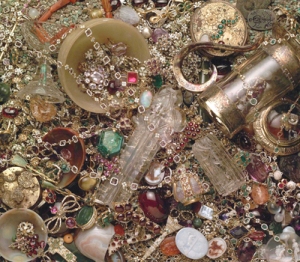 Now known as the Cheapside Hoard, it dates from the 16th and 17th centuries and includes neck chains, pendants, hat ornaments, cameos and rings – among the items is a gold watch set into a hinged case made from a Columbian emerald, a tiny bejewelled gold scent bottle, and an onyx cameo of Queen Elizabeth I.

Other items include unfinished ornaments and unmounted gemstones which have origins spanning the world – from Asia and Middle East to South America. While these give support to the idea that the hoard is part of a goldsmith’s reserve stock, mystery still surrounds why it was buried in the building (although Cheapside was known for its goldsmiths during the era which the hoard dates from).

WHERE: Museum of London, 150 London Wall (nearest tube station is Barbican, St Paul’s or Moorgate); WHEN: 10am to 6pm, Monday to Sunday; COST: Free; WEBSITE: www.museumoflondon.org.uk