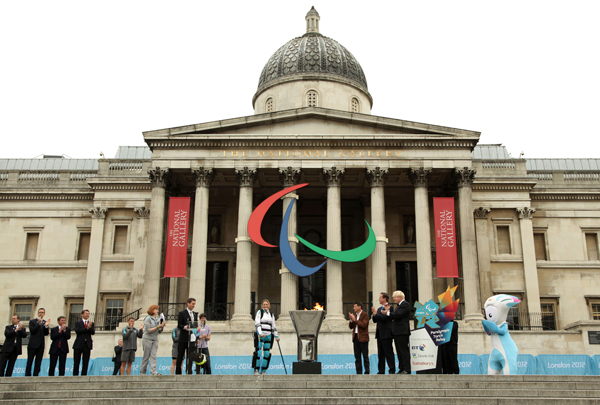 Claire Lomas, an event rider paralysed from the chest down who became the first person to complete a marathon in a bionic suit when she finished the London Marathon in April, is applauded by Lord Sebastian Coe, chairman of the London Organising Committee of the Olympic and Paralympic Games, Prime Minister David Cameron and the Mayor of London, Boris Johnson, after lighting a ‘celebration cauldron’ in Trafalgar Square (with the National Gallery in the background). The event, using the English National Flame which was originally created at Scafell Pike, was part of the Paralympic Flame’s visit to London last Friday during which it was taken to various landmarks across London including the Houses of Parliament, Notting Hill ahead of last weekend’s Notting Hill Carnival, and the Royal Opera House in Covent Garden. During the event in Trafalgar Square, 26 ‘Flame ambassadors’ each collected a ‘splinter’ of the Flame in a lantern to take to various Flame celebrations being held around the country over the past few days. The Flame visits London again this Wednesday in the 24 hour Torch Relay leading up to the Opening Ceremony of the Paralympic Games on Wednesday night. For more on the Paralympic Torch Relay, see www.london2012.com/paralympics/torch-relay/. PICTURE: LOCOG. 