• The 2013 Hampton Court Palace Festival kicks off tonight. Highlights include a performance by the Royal Philharmonic Concert Orchestra and fireworks on Saturday night while other artists featured include Jools Holland, Lisa Stansfield, Frank Valli and the Four Seasons, Imeda May, Bjorn Again, Russell Watson, Cliff Richard and Joe Bonamassa and Beth Hart. For the full programme of events over the next couple of weeks, check out www.hamptoncourtpalacefestival.com.

• It’s all about good deeds at the Foundling Museum. Opening at the museum in Bloomsbury tomorrow, a ceramic artist Clare Twomey’s exhibition – Exchange: 1,000 Good Deeds at the Foundling Museum – features more than 1,000 cups and saucers with each cup hiding instructions for a good deed underneath. The instructions are only revealed when a visitor selects a cup – they either agree to do the good deed, leaving it exposed and taking home the cup, or, if they’re not able to, can return the cup to its saucer. There is a limit of 10 cups available for exchange each day – ring or check the website for times when the exchanges may take place. Entry is free with museum admission. Runs until 15th September. For more, see www.foundlingmuseum.org.uk.

• A memorial ledger stone to former Labour PM, Harold Wilson (later Lord Wilson of Rievaulx), was dedicated in Westminster Abbey this week. Lord Wilson (1916-1995) was PM from 1964 to 1970 and 1974 to 1976. The stone is placed near where Earl Attlee’s ashes were interred at a memorial service attended by Lord Wilson when Prime Minister in 1967. For more, see www.westminster-abbey.org.

• On Now: Royal Academy of Arts Summer Exhibition 2013. Coordinated by Royal Academicians printmaker Norman Ackroyd and Eva Jiricna, this year’s exhibition at the Royal Academy in Piccadilly features more than 1,000 artworks with many going on display for the first time. Among the works on display will be Grayson Perry’s series of six tapestries entitled The Vanity of Small Differences – inspired by Hogarth’s A Rake’s Progress, it tells the story of Tom Rakewell. Other highlights include a room dedicated to portraiture – including photographs and works on paper – and a new large scale sculpture by Anthony Caro. Runs until 18th August. Admission charge applies. For more, see www.royalacademy.org.uk. 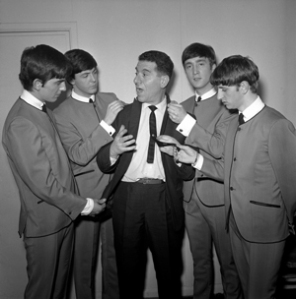 • A new exhibition of the works of renowned music photographer Harry Hammond opens at the V&A this Saturday. Halfway to Paradise: The Birth of British Rock features more than 60 portraits, behind the scenes and performance shots showing stars including Roy Orbison, Ella Fitzgerald, Cliff Richard and Shirley Bassey. Hammond’s pictures, which are all drawn from the V&A collection, chronicle the jazz and big band musicians of the 1950s like Frank Sinatra and Billie Holiday, visits from American rock ‘n roll stars such as Little Richard and Gene Vincent and early British rock groups – such as the Animals and the Beatles (pictured with Dougie Millings) – of the 1960s. There will also be behind the scenes shots of some of the early days of music television in the 1950s and the exhibition will be accompanied by a soundtrack by the artists depicted. Born in the East End, Hammond was a society portrait photographer before serving as a reconnaissance photographer with the RAF in World War II. It was on his return to London after the war that he started photographing people working in the music business, later becoming one of the primary photographers for the New Musical Express (NME) magazine. Runs until 3rd March next year. Admission is free. For more, see www.vam.ac.uk. PICTURE: V&A Images.

• Still on a musical theme and 1930s cabaret star Leslie Hutchinson (1900 – 1969) has been honored with an English Heritage Blue Plaque at his former home in Chalk Farm. The singer and pianist, better known to many as simply ‘Hutch’, lived at 31 Steele’s Road between 1929 and 1967. The Grenada-born performer lived in New York and Paris before coming to London where he became one of the most popular cabaret performers of the 1930s – one of his signatures was apparently to arrive at nightclubs dressed like an aristocrat with a white piano strapped to his chauffeur-driven car (this was despite the racial prejudice he faced which saw him being asked to enter by the servant’s quarters when performing at some of Mayfair’s grandest homes). Hutch lived at the Steele’s Road property for almost all the years he lived in London, only leaving two years before his death in 1969. The plaque was unveiled by his daughter, Gabrielle Markes, who only discovered her parentage in middle age and who subsequently proposed that the plaque be placed on the house. For more, see www.english-heritage.org.uk.

• On Now: On the Road: Jack Kerouac’s Manuscript Scroll. This new exhibition at the British Library centres on Kerouac’s 120-foot-long manuscript scroll of On the Road and explores the development of the novel which, written over a period of three weeks in April 1951 using rolls of taped together architect’s paper, came to define the Beat Generation. The exhibition, which relaunches the Library’s Folio Society Gallery, will show the first 50 feet of the scroll in a specially-designed case. Other exhibits include first editions of other Beat classics such as The Naked Lunch and sound recordings featuring the likes of Kerouac, Allen Ginsberg and William S. Burroughs. Runs until 27th December. Admission is free. For more, see www.bl.uk.