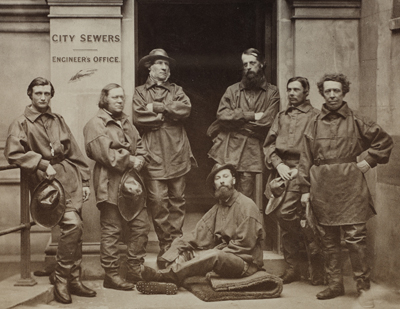 • Rat catchers, trapeze artists and politicians are among the subjects depicted in photographs, prints and drawings which form the heart of a new exhibition spanning 500 years of London’s history. Opening at the London Metropolitan Archives, The Londoners: Portraits of a Working City, 1447 to 1980 includes portraits of unknown Londoners as well as some of such luminaries as author Charles Dickens, 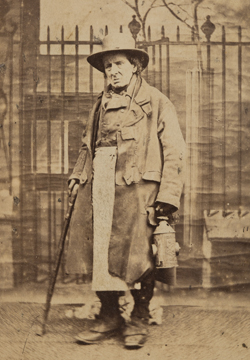 engineer Isambard Kingdom Brunel and Lord Protector Oliver Cromwell. Highlights include a rare photograph of Charles Rouse, reputedly the last night watchman (pre-cursors to the Metropolitan Police) still on duty in London in the mid-19th century, an 1830 lithograph of a crossing sweeper, the ‘Old Commodore of Tottenham Court Road’, and a number of photographs shot by George WF Ellis in the mid-1920s including a portrait of feminist and social campaigner Dora Russell. The exhibition, which is part of a series of events marking 950 years of London archives, opens on Monday and runs until 5th July at the LMA in Clerkenwell. For more, see www.cityoflondon.gov.uk/lma. PICTURES: Top – A team of sewermen, photographed outside the City Sewers department in 1875. Right – Jack Black of Battersea, noted rat catcher to Queen Victoria, pictured here from a daguerreotype photograph taken for Henry Mayhew’s ‘1851 London Labour and the London Poor’. Both images © London Met Archives.

• The response of artists and photographers to London’s Blitz during World War II forms the subject of a new exhibition which has opened at the Museum of London. Perspectives of Destruction: Images of London, 1940-44 explores how artists and photographers responded to the devastation caused by the massive aerial bombings. Much of the artwork was commissioned by the government’s War Artists Advisory Committee and focused on damage to buildings rather than deaths and injuries to people due to the impact it may have had on public moral. At the heart of the display is nine recently acquired drawings from official war artist Graham Sutherland depicting damage in the City of London and East End between 1940 and 1941. Also on show is a 1941 oil painting of Christchurch on Newgate Street by John Piper and David Bomberg’s Evening in the City of London, dating from 1944, which depicts St Paul’s Cathedral dominating the horizon above a devastated Cheapside. There’s also a photograph of a V-1 flying bomb narrowly missing the iconic cathedral which, along with eight others, was taken by City of London police constables Arthur Cross and Fred Tibbs. Other artists with works featured include Henry Moore, Bill Brandt and Bert Hardy. Runs until 8th May. Admission is free. For more, see www.museumoflondon.org.uk.

• A series of installations commissioned from 12 artists – asked to imagine what Europe might look like 2,000 years from now and how our present might then be viewed – have gone on display in the V&A as part of the week long ‘Collecting Europe’ festival. The festival, which only runs until 7th February, includes a range of talks, discussions, live performances and workshops aimed at encouraging debate around Europe and European identity in the light of the Brexit vote. The installations, commissioned by the V&A and Goethe-Institut London, have been created by artists from across Europe. For more, see www.vam.ac.uk/collectingeurope.

• Bronze casts of black women’s movement activists’ fists go on display at the City of London’s Guildhall Art Gallery from Tuesday. A Fighters’ Archive, features the work of sculptor Wijnand de Jong and pays tribute to 15 women who were members of various activist groups. The sculpture takes the form of a boxing archive – casts of boxers’ fists collected by boxing academies to commemorate prize fighters – with the fists cast from life. Subjects include Professor Dame Elizabeth Anionwu, Emeritus Professor of Nursing at the University of West London and patron of The Sickle Cell Society, Mia Morris, creator of Black History Month, and Gerlin Bean, founder of Brixton Black Women’s Centre. The fists can be seen until 19th March. Admission if free. For more, see www.cityoflondon.gov.uk/things-to-do/visit-the-city/attractions/guildhall-galleries/Pages/guildhall-art-gallery.aspx.