Originally founded in the early 1800s, the Columbia Road market in East London has since evolved into a specialist flower market on Sundays. 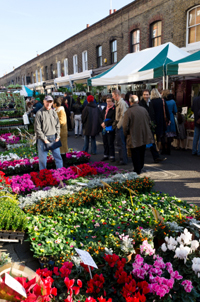 First emerging as a general street market in the early 1800s, the market was formalised in the mid 1800s when banking heiress Angela Burdett-Coutts financed the construction of the now demolished – and somewhat architecturally fanciful – Columbia Market. This opened in 1869 at the northern end of the road but didn’t prove a great success. Despite efforts to save it – including apparently relaunching it as a fish market – it closed in 1885.

The market building – which is said to have resembled the sort of market hall that might be found in rural areas – was later used as a warehouse but after suffering bomb damage in World War II were demolished.

The market, meanwhile, reappeared on the street and as the area’s Jewish population grew, moved to a Sunday, a decision which allowed traders from Covent Garden and Spitalfields to trade their leftover goods from the previous day.

The introduction of new regulations – including those introduced in the 1960s requiring traders to attend regularly – saw the market gradually transform itself into the colorful market selling cut flowers, plants and bulbs you can find there today. Popular with film makers and photographers thanks to the colourful backdrop it provides, the surrounding streets also feature a range of interesting independent shops and cafes.