It’s summer and that means, fingers crossed that the weather holds, Londoners start looking for the beach. One of the easiest to access coastal resorts – just an hour on the train – is the East Sussex town of Brighton. 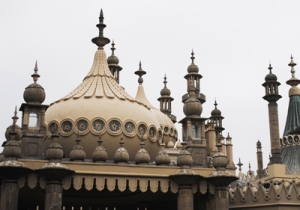 Its history dates back to before the Doomsday Book and by medieval times, the town – previously known as Brighthelmstone – was prosperous enough to become a target to French raiders who burnt it down during a raid in 1514.

Yet much of what we now know as Brighton dates from the late 18th century when the town was transformed into a fashionable seaside resort. But before we get to that, there’s a couple of notable survivors from earlier days worth mentioning.

First up is the  14th century St Nicholas’ Church which, although considerably altered in later years, still contains a Norman font and has several graves of interest in the churchyard including that of Captain Nicholas Tattersall who carried King Charles II to France in his boat in 1651, as well as those of Phoebe Hessel, famed for having served 17 years in the army during the 1700s disguised as a man, Sake Dene Mohomed who first brought Turkish baths to Brighton and Amon Wilds, a famed Regency architect and builder.

And for a feel of what the medieval streetscape may have been like, head to the central shopping area known as The Lanes which still follows the medieval street pattern (although the shops date from later period) and which, boasting a range of interesting shops, is well worth spending some time poking about in.

While Brighton had gradually been establishing a reputation as a sea bathing resort in the years prior to 1783, in that year the town’s profile received a valuable boost when the Prince Regent (later King George IV) visited the town. So taken with it was he that not only did he make repeat visits, he also constructed the magnificently opulent Royal Pavilion (pictured) – completed in 1822 and designed by John Nash – which still stands as one of the town’s foremost attractions.

The property, which Queen Victoria sold to the town in 1850 for the grand price of £53,000, boasts a series of exquisitely decorated chambers inspired by exotic ‘oriental’ themes. A 10 year, £10 million restoration project was completed in 1991.

Other properties in the town dating from a similar era include the Brighton Dome, which, completed in 1808, was originally the stables for the Prince Regent (back in the day when the Royal Pavilion was simply a farmhouse – in fact, it’s said that it was that fact people commented that the Prince’s horses were better accommodated than the man himself which helped spur him to build the Royal Pavilion). These days it’s the town’s main landmark entertainment venue and contains a concert hall and theatre.

Another property of the era is the Western Pavilion which feature a large Indian dome in reference to those of the Royal Pavilion and was built by Amon Henry Wilds, son of the architect Amon Wilds and a partner in his architectural practice, in 1831 as a residence. It stands next to the Gothic house built by his father, and another architect, Charles Busby, in the 1820s.

The arrival of the railway in 1841 further opened up the town to Londoners which in itself led to the construction of numerous waterfront hotels (the most famous of which is the Grand Hotel, built in 1864 and the scene of a 1984 IRA bombing aimed at killing then PM Margaret Thatcher).

The boom also saw three piers built running out off the foreshore – the Chain Pier (built in 1823 and destroyed by a storm in 1896), the West Pier (constructed in 1866, the derelict remains of which stand starkly in the waters off the town today after it was closed in 1975), and the Palace Pier (constructed in 1899, it is now hosts a lively funfair and, since 2000, has been formally known as Brighton Pier).

The late 1800s also saw the founding the Booth Museum (1874) by naturalist and collector Edward Thomas Booth (located in Dyke Road, it is now known as the Booth Museum of Natural History) and Volk’s Electric Railway which opened in 1883 and is now the ‘world’s oldest operating electric railway’, still running daily trains between Brighton Pier and Black Rock near the Marina.

Brighton, now part of the City of Brighton & Hove, remains a popular beach resort for Londoners, both for its beach and its nightlife, so on a warm day be prepared to fight the crowds.

Visit Brighton has a range of maps and walks to help you explore the city. Visit www.visitbrighton.com for more information.

Now famed for its shopping and proximity to museums, the former village of Knightsbridge takes its name from a bridge which once spanned the Westbourne River (a river now located underground which flows from Hampstead down through Sloane Square to enter the Thames at Chelsea) and linked the village of Kensington with London. 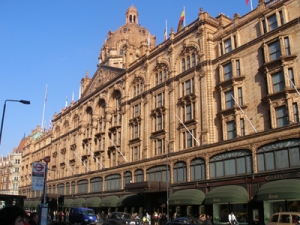 While the origins of the bridge’s name remain shrouded in mystery (the bridge itself reportedly stood at what is today Albert Gate), the anecdotal stories which might explain it include a tale that two knights once fought here and another which attributes the name to the fact that the area was thought so unsafe that to come without a knight was considered foolhardy. Indeed the name Knightsbridge was once synonymous with highwayman and robbers waiting to plunder passersby.

While the name is apparently not mentioned in the Doomsday Book, by the 13th century it is listed as a manor belonging to the monks at Westminster Abbey (this was apparently a gift from King Edward I – in fact some accounts have the area also recorded as King’s Bridge, Kyngesbrigg). One of the key events which the area apparently hosted was the meeting of Empress Matilda with representatives of London’s citizens in 1141 during her ongoing fight for supremacy with King Stephen.

The area remained relatively rural – and as a village in its own right – until the late 18th century when the area finally became joined to the ever-expanding metropolis.

These days Knightsbridge is little more than a road and a strip of highly developed land to the south (Westminster City Council’s Knightsbridge conservation area, which contains more than 275 listed buildings, runs as far east as Queen’s Gate) but it does boast some very high end shopping – think Harrods (pictured), founded in 1824 and opened on the current site almost 30 years later, and Harvey Nichols, founded in 1813.

There’s also some very grand late Victorian residential real estate (much of which is owned by the the Duke of Westminster and Earl Cadogan), which, along with new developments, have made Knightsbridge one of the highest price property markets in London (and indeed, the world).

The eastern end of Knightsbridge – Westminster Council include Royal Albert Hall in its Knightsbridge Conservation Zone – runs into the museum district of South Kensington, home to some of London’s best museums, including the Victoria & Albert Museum and the National History Museum.