• Roman tools and other artefacts from the era including a stamp for metal ingots and pottery are among objects found in London’s ‘lost’ Walbrook Valley which have gone on display at the Museum of London. Working the Walbrook features objects excavated during the past 170 years of digs around the watercourse which once cut the city in half, running from Finsbury Circus to Cannon Street. Created as part of a PhD project being supervised by the Museum of London and the University of Reading, the objects on show include an iron stamp dating from the Roman period inscribed with the letters MPBR (understood to be an abbreviation for ‘Metal Provinciae Britanniae’ – “the mines of the province of Britannia”) which is believed to have been used by officials to stamp metal ingots passing through London on their way to the Continent. Other items include Roman farming and gardening tools, and a pot decorated with a smith’s hammer, anvil and tongs which was found at the bottom of a well in Southwark and which may have been linked to worship of the god Vulcan. The free display is on show until March. For more, see www.museumoflondon.org.uk. PICTURE: Gardening tools from Roman London. A pruning hook, bailing fork and shears © Museum of London

• A series of prints by Pablo Picasso spanning the period from the late 1940s to the late 1950s form the heart of a new exhibition at the British Museum in Bloomsbury. The prints, which include 16 lithograph prints and three aquatint prints, were recently acquired by the museum in what represents the final part of the museum’s effort to more fully represent the artist’s work as a printmaker. Six of the lithographs were inspired by the beauty of Picasso’s lover Francoise Gilot while others feature Bacchanalian scenes and portraits of German-born dealer Daniel-Henry Kahnweiler. On display from Friday in Gallery 90A, they can be seen in the free exhibition until 3rd March. For more, see www.britishmuseum.org.

• The details of some 160,000 people buried at Highgate Cemetery in north London have been made available online. Deceased Online has announced that all records for the period from May, 1839, to August, 2010 – a total of 159,863 people, are now available, including digital scans of original registers, details of who is buried in each grave and location maps for most graves. Notable people buried at Highgate include author Douglas Adams, philosopher Karl Marx and chemist and physicist Michael Faraday. For more, see www.deceasedonline.com

Cemeteries can often provide a fascinating insight into past lives and among the most prominent in London is Highgate Cemetery, located in the city’s north.

With the population of London growing rapidly in the early 1800s, the 17 acre Highgate cemetery was first opened in 1839 with the first burial taking place in May that year. 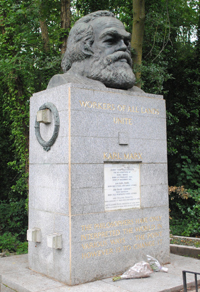 The cemetery quickly became one of London’s most fashionable and was extended by 20 acres before the opening in 1856 of a new cemetery to the east. These days both are open to tourists although the West Cemetery can only be explored on a guided tour, thanks at least partly to vandalism.

Features at the West cemetery, meanwhile, include an avenue of Egyptian-style vaults and the vaults in an inner ring known as the Circle of Lebanon. Among those buried there are physicist Michael Faraday and the parents and brother of Charles Dickens.

The cemetery is now operated by a non-profit charity, the Friends of Highgate Cemetery.