The BBC Television Centre in London’s west closed its doors on Sunday, almost 53 years after it was officially opened on 29th June, 1960.  The 14 acre site in Wood Lane, White City, was sold for £200 million to developers Stanhope Plc. It will be redeveloped into new premises including a hotel, offices, flats, townhouses and a cinema. The Television Centre – the main building of which was affectionately known as the ‘doughnut’ thanks to its circular shape – has hosted some of the UK’s most iconic television shows – from The Two Ronnies to Newsnight, Monty Python’s Flying Circus to Dr Who, Fawlty Towers and Blue Peter. It’s far from the end of the relationship between the site and the BBC. Various arms of the BBC will return to the site in coming years and other plans reportedly include the creation of a ‘virtual attraction’ where visitors can experience the creation of shows like Top Gear and EastEnders. BBC stars including Sir Michael Parkinson, Penelope Keith, Ronnie Corbett, Sir Terry Wogan and Sir David Jason have paid tribute to the building in a TV special, Goodbye Television Centre, broadcast on 22nd March. For more, see www.bbc.co.uk.

Hidden away in Bloomsbury almost in the shadow of the gigantic bulk of the British Museum, this small museum offers an interesting insight into the development of cartoons and comic strips from a uniquely British perspective. 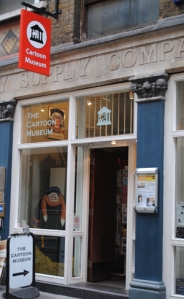 Opened in 2006, the museum exhibits are spread over two floors and trace the history of cartoons and comic strips from their origins in the 1700s through to today’s graphic novels.

While it can seem at first glance only a small display, there’s a wealth of information accompanying the more than 200 exhibits which range from Hogarth prints and early satirical political cartoons by the likes of James Gillray and George Cruikshank through to the works of more modern artists like David Low and Donald McGill, originals of comic strips like Dennis the Menace and Andy Capp and even manga Shakespeare.

And no need to worry about the kids – if they become bored (as is likely), there’s an interesting exhibition on the creation of Peppa Pig complete with original storyboards and a cartoon running on the television as well as plenty of reading materials and, upstairs, the chance for them to indulge their passion for cartoons by designing their own.

The museum is also currently running a splendid exhibition on Dr Who comics spanning the period from 1964 (the year after the first Dr Who was televised) through to today. For Dr Who fans, this exhibition – which runs until 30th October – is a must.

Don’t forget to pause at the shop on the way out – it’s stocked with all sorts of comic-related paraphernalia.

WHERE: The Cartoon Museum, 35 Little Russell Street (nearest Tube stations are Tottenham Court Road, Holborn and Russell Square); WHEN: 10.30am to 5.30pm, Tuesday to Saturday, 12.30pm to 5pm Sundays; COST: £5.50 an adult/£4 concessions (£3 students)/children under 18 free (children 12 or under must be accompanied by an adult); WEBSITE: www.cartoonmuseum.org