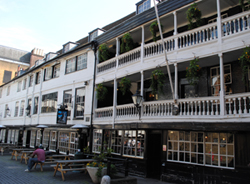 • The George Inn, Southwark. Located at 75-77 Borough High Street, the George Inn is London’s last remaining galleried inn. The current building has its origins in the late 17th century after the original inn, which can be traced back to at least the mid-1500s – was destroyed in a fire in 1676. Now owned by the National Trust, it is leased out and remains open as a public house – part of the Greene King chain. While its known for its connections with 19th century writer Charles Dickens – he was a patron of this establishment and mentions it in Little Dorrit (a fact we mentioned in our series on Dickens back in 2012), the inn (or at least the previous version of it) also has Shakespearean connections with its prime Southwark location meaning it’s quite possible Shakespeare himself may have visited. Whether that’s the case or not, it is known that the premises served at time as a theatre of sorts in his day with acting troops performing in the courtyard while audience members could stand in the courtyard and watch or pay extra for a seat in the gallery. For more on the inn, see www.gkpubs.co.uk/pubs-in-london/the-george-inn-pub/. 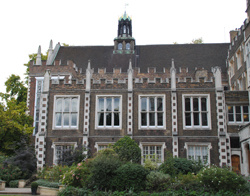 • Middle Temple Hall. Built between 1562 and 1573 by Edmund Plowden (memorialised with monuments in both the hall and nearby Temple Church), this magnificent Tudor hall has survived both the Great Fire of London and the Blitz and continues to serve the legal profession today. It too was used as a theatre/concert hall in Elizabethan times and later as a site for Inigo Jones’ masques but in terms of the Shakespearean connection, it is known for being where the first recorded performance of Twelfth Night took place – on the night of Candlemas (2nd February) 1602. The Lord Chamberlain’s Men performed the play and it is thought that Shakespeare himself was among the players. For more on the hall, which is only rarely opened to the public, you can visit our earlier posts here and (on ‘Drake’s Cupboard) here or the official website at www.middletemple.org.uk/home/.

For more on the George Inn, check out Pete Brown’s social history Shakespeare’s Local: Six Centuries of History Seen Through One Extraordinary Pub

Last weekend saw thousands of people make their way to rarely opened properties across London as part of Open House London. Among the properties we visited was the Middle Temple Hall, one the finest example of a 15th century hall in London (if not the UK). The hall was built in the 1560s and early 1570s – by which time the Middle Temple, one of the medieval Inns of Court (more of which we’ll be talking about in an upcoming series), had already existed for about 200 years – and the hall which the Temple currently used, that of the former Templar Knights, was starting to fall apart. The new hall was constructed under the direction of law reporter Edmund Plowden, then Treasurer of the Inn, and funded by members of the Middle Temple. In use by about 1570, Queen Elizabeth I is, according to some stories, said to have dined there many times and it was in the hall that the first performance of Shakespeare’s Twelfth Night took place. While it suffered some damage in World War II bombings, the hall still looks much as it did in the late 1500s. It remains at the centre of the Middle Temple’s collegiate and social life and it is here that members are called to the Bar. Among the notable objects inside are numerous paintings and stained glass memorials of people associated with the Inn (including Sir Walter Raleigh and numerous monarchs – from King Charles I to King Edward VII) as well as the High Table – a table made of three 29 foot long planks from a single oak, it is said to be a gift from Queen Elizabeth I – and the ‘cupboard’, a smaller table which was apparently made from the hatch cover of Sir Francis Drake’s ship, the Golden Hind. Late note: I should add that the Middle Temple Hall is not normally open to the public.