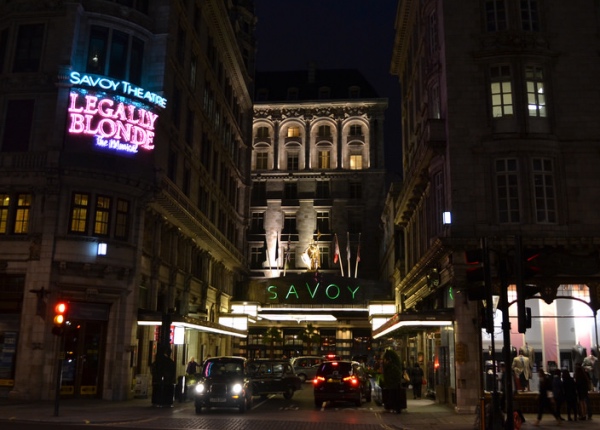 The Savoy Theatre, located next to the Savoy Hotel just off the Strand in the West End, was the first public building in London to feature electric lighting. 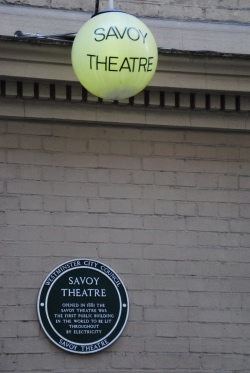 Built to the designs of CJ Phipps and decorated by Collinson and Locke, its construction was instigated and financed by Richard D’Oyly Carte with the specific intention of hosting WS Gilbert and Arthur Sullivan‘s operas.

The theatre subsequently hosted comedic operas by other composers as well as productions of Shakespeare (Henry Irving was among those who trod the boards here in the early 20th century).

A fire caused considerable damage in 1990 after which the theatre was again renovated, this time under the guidance of the theatre’s then chairman Sir Hugh Wontner and architect Sir William Whitfield, with the public areas returned to how they had looked under Tugwell and Ionides’ scheme from the 1920s. It reopened in July, 1993, with a Royal Gala performance by the English National Ballet (Diana, Princess of Wales, was among those in attendance).

Now owned by the The Ambassador Theatre Group, the Savoy these days it shows a range of different productions. It’s currently hosting Dolly Parton’s 9 to 5: The Musical. For more, see www.thesavoytheatre.com.

PICTURES: Above – Neon sign for The Savoy Theatre advertising a previous production with the hotel and theatre entrance (Loren Javier/image cropped/licensed under CC BY-ND 2.0); The Savoy Theatre with a Westminster City Council Green Plaque commemorating it being the first public building with electric lighting in London (David Adams).