In this, the final in our series looking at the Queen’s relationship to London we take a look at some of the key monuments to her family in the city. 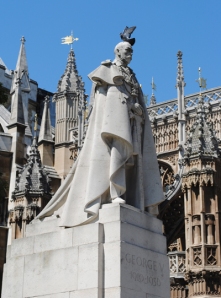 • King George V (1865-1936). Queen Elizabeth II’s paternal grandfather, King George V, can be seen in a statue in Old Palace Yard, overlooked by Westminster Abbey (pictured here complete with pigeon). The work of Sir William Reid Dick, it was erected in 1947 and depicts the king wearing the robes of the Order of the Garter.

• Queen Mary (1867-1953). Paternal grandmother to the current Queen, Queen Mary the consort of King George V is commemorated with a small profile relief in The Mall, close to the corner of Marlborough Road. Also the work of Sir William Reid Dick, it was unveiled in 1967.

• King Edward VIII (1894-1972). The older brother of King George VI who infamously abdicated his crown thanks to his love for American divorcee Wallis Simpson, it’s perhaps not surprising that there are no public statues to King Edward VIII in London (at least, none we’re aware of – if you know differently, please let us know). 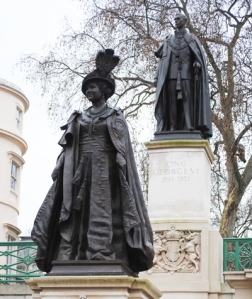 • King George VI (1895-1952). The father of Queen Elizabeth II is commemorated in a statue in Carlton Gardens, just off The Mall. Erected in 1956, it was the work of William McMillan and as with that of King George V, depicts the king wearing Garter robes. It was moved in 2008 from nearby to its current site to form part of the joint memorial to the Queen’s  parents.

• Elizabeth, The Queen Mother (1900-2002). The long-lived Elizabeth Bowes-Lyon, who died in 2002 at the age of 101, is commemorated in the other half of the joint monument which stands just off The Mall. Unveiled in 2009, the statue of the Queen is the work of sculptor Philip Jackson and shows the Queen in her younger days wearing the robes of the Order of the Garter.