Liberty, now a West End institution, was founded by Arthur Lasenby Liberty in 1875 with a vision to transform the way people thought of fashion and homewares.

Born the son of a Buckinghamshire draper, Liberty worked with relatives from a young age before he eventually started work with a women’s fashion house, Farmer and Rogers. Rising to management, when they refused to make him a partner in the business, he decided to strike out on his own and established Liberty & Co at 218a Regent Street, an ‘oriental warehouse’ selling ornaments, fabric and objets d’art. He named the property East India House. 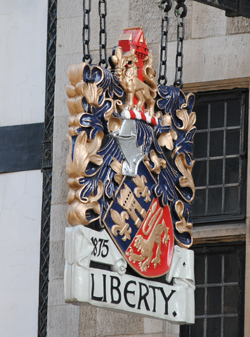 Only 18 months after he first set up shop – financed with a £2,000 loan from his future father-in-law and employed three staff – he was already expanding his premises into properties to the south in Regent Street to house furnishings and carpets. He eventually took over all the buildings between 140 to 150 and named the extended building Chesham House.

The costume department was introduced in 1884 and together with its director EW Godwin, Liberty created in-house fashions to challenge those of Paris. He is also noted for having encouraged and collaborated with designers like Archibald Knox and William Morris.

Liberty, who took the company public in 1894, was knighted in 1913. He died in 1917, seven years before the current Liberty store – the mock-Tudor building on the corner of Regent Street and Great Marlborough Street – was built.

Designed by Edwin T Hall and son, the shop was built from the timbers of two ships, the HMS Impregnable and the HMS Hindustan (and the shop frontage measures the same length as the latter). It was built around three light wells, each of which was surrounded by smaller rooms – many of which have fireplaces and were designed to give the feel of rooms in a house.

Features on the Grade II*- listed building include its weathervane – an exact replica of the Mayflower, which took pilgrims to the US in 1620, decorative shields including the arms of Shakespeare and those of the wives of King Henry VIII, and the clock above the Kingly Street entrance.

Liberty, which is generally acknowledged to have been a powerful influence on 19th and 20th century fashions and tastes, was bought by its current owners, BlueGem in 2010.