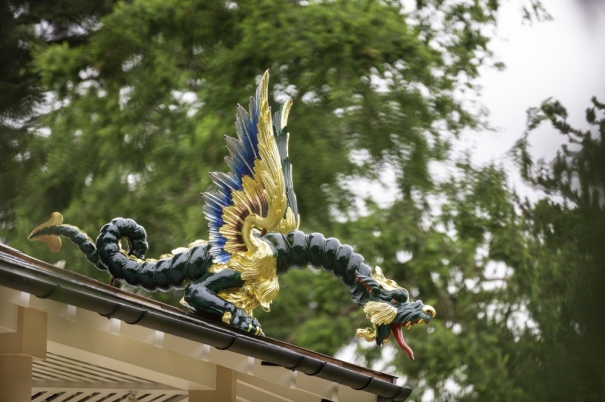 More than 200 years after they disappeared, the dragons have returned to Kew Garden’s Great Pagoda. The 10 storey octagonal pagoda – which, as we reported, reopened to the public in July after a four year, £5 million restoration project by Historic Royal Palaces in conjunction with the Royal Botanic Gardens, Kew – was built in 1762 to the designs of Sir William Chambers and was a birthday gift for Princess Augusta, founder of the gardens. Used by the Georgian Royal Family to entertain visitors, it was famously adorned with 80 brightly coloured dragons but these disappeared in the 1780s. Rumours suggested they were used as payment for the Prince Regent’s gambling debts but apparently the truth is more banal – Chambers took them off when he restored the building in 1784 and they were found to be rotten. But they’re back (some of the new dragons are gilded with real gold and while some are hand carved from cedar, others were reportedly made on a 3D printer) and to celebrate their return (and the reopening of the pagoda to the public for the first time in decades, complete with a 253 step climb), we today publish some images. Admission charge applies. For more, see www.kew.org/kew-gardens/whats-on/climb-the-great-pagoda. PICTURES: © Richard Lea-Hair – Historic Royal Palaces. 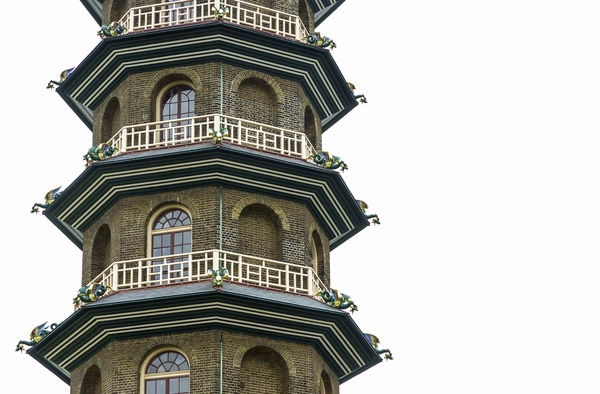 • Join the Georgian Queen Caroline for a garden party in the grounds of Kensington Palace this weekend. The Georgian Court will be taking to the palace gardens for a summer celebration featuring music, military drills and theatre as they bring the era to life. Visitors are encouraged to immerse themselves in the experience as a courtier with the gardens decked out in a range of tents where they can try out costumes and powdered wigs as well as learn court etiquette, swordplay and dancing while the ice-house will feature Georgian ice-cream (and it’s rather odd flavours such as parmesan). Runs from tomorrow until Sunday. Admission charges apply (under 16s go free with a maximum of six children per paying adult). For more, see www.hrp.org.uk/KensingtonPalace/. PICTURE: ©Historic Royal Palaces

• First created in 1923, a playground in Victoria Tower Gardens – newly named the Horseferry Playground – has been reopened after improvement works. The works, carried out under the management of Royal Parks, have seen the reintroduction of a sandpit as well as the installation of new swings and slide, dance chimes and a stare play installation to represent the River Thames. The playground, located close to the Houses of Parliament in Westminster, also features a series of timber horse sculptures, new seating and a refreshment kiosk with metal railings designed by artist Chris Campbell depicting events such as the Great Fire of London and Lord Nelson’s funeral barge and views of the River Thames. The project has also seen the Spicer Memorial, commemorating role of paper merchant and philanthropist Henry Spicer in the establishment of the playground – then just a large sandpit, restored. For more, see www.royalparks.org.uk/parks/victoria-tower-gardens.

• Now On – A Dickens Whodunnit: Solving the Mystery of Edwin Drood. This temporary exhibition at the Charles Dickens Museum in Bloomsbury explores the legacy of Dickens’ final novel The Mystery of Edwin Drood, left unfinished after his death in 1870. Visitors are able to investigate crime scenes, search for murder clues and see the table on which the novel was penned as well as clips from theatrical adaptations, and a wealth of theories on ‘whodunit’. The exhibition runs until 11th November. Admission charge applies. For more, see www.dickensmuseum.com.

• The Georgians are under the spotlight in a new exhibition opening at the British Library tomorrow. Georgians Revealed: Life, Style and the Making of Modern Britain explores the ways in which the Georgian world influenced pop culture in Britain today, everything from fashion and theatre-going to our obsessions with celebrity scandals. The display features more than 200 artefacts from the library’s collection and includes Jeremy Bentham’s violin, Joseph van Aken’s An English Family at Tea, rare books and magazines, and illustrations and designs of landmark building’s such as Sir John Soane’s home (and now museum) in Lincoln’s Inn Fields. The exhibition, which is accompanied by a series of events (see the library website for details) comes ahead of the 300th anniversary of the accession of King George I next year. Runs until 11th March. Admission charge applies. Meanwhile, to mark the exhibition, the library has joined with Cityscapes in launching a new Georgian garden installation on the library’s piazza. Titled Georgeobelisk, the six metre high installation, will remain on the piazza for five months. A tribute to the four King Georges, it also serves as a reminder that it was also during the Georgian era that the British love of gardening was cultivated. For more, see  www.bl.uk/whatson/exhibitions/georgiansrevealed/index.html. PICTURE: Spectators at a Print shop in St Paul’s churchyard © British Museum.

• Painting normally housed in “Britain’s answer to the Sistine Chapel” go on display in Somerset House today. The artworks, described as the “crowning achievement” of wartime artist Stanley Spencer, usually grace the walls of Sandham Memorial Chapel but are on display in London while the National Trust carries out restoration work at the Berkshire property. Spencer painted the works – which combine realism and visions from his imagination and were completed in 1932 – after serving as a hospital orderly during World War I.  The free display – Stanley Spencer: Heaven in a Hell of War – can be seen until 26th January. For more, see www.somersethouse.org.uk.

• Regent Street’s Christmas lights – a preview of the upcoming DreamWorks film Mr Peabody and Sherman – will be turned on this Saturday night. Actor Ty Burrell, director Rob Minkoff and singer Leona Lewis will have the task of switching on the lights at about 7.15 pm while performers will include Passenger, Eliza Doolittle and former Spice Girls Emma Bunton and Melanie C. The event will be hosted by radio presenters Bunton and Jamie Theakston. The street will be traffic free all day and from 3pm to 7pm, Regent Street retailers will be showcasing fashions on a catwalk located just North of New Burlington Street. Programmes will be available from information points on the day.

• A new organ was dedicated in Westminster Abbey’s Lady Chapel on Tuesday. The organ was commissioned by the Lord Mayor of London, Roger Gifford, as a gift to the Queen to mark the 60th anniversary of her coronation in 1953. The Queen agreed the organ, which had briefly resided at the Lord Mayor’s residence the Mansion House, should be installed permanently in the Lady Chapel, built by King Henry VII. The new organ was dedicated by the Earl of Wessex. For more, see www.westminster-abbey.org.

• Now On: Achievement: New Photographs 2011-2013. Inspiring Britons at the peak of their professions are the subject of an exhibition running at the National Portrait Gallery. The display of recently acquired and previously un-exhibited photographs depict the likes of writer and presenter Charlie Brooker (by Chris Floyd), actress Gina McKee (Mark Harrison) and Skyfall director Sam Mendes (Anderson & Low). Admission is free. Runs until 5th January in Room 37a. For more, see www.npg.org.uk.