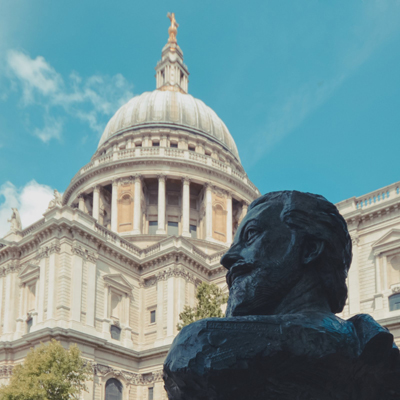 A new bust of priest and poet John Donne was unveiled outside St Paul’s Cathedral earlier this year. Donne was made  Dean of St Paul’s in 1621, a position he held until his death 10 years later. He was subsequently buried in Old St Paul’s Cathedral and a memorial to him – a likeness apparently based on a drawing of him in his shroud – was the only monument to survive the Great Fire of London in 1666. It’s still inside the cathedral. The new bronze bust, located in the garden to the south of the cathedral, was the work of artist Nigel Boonham and has Donne looking east towards his birth place in nearby Bread Street. The text “Hence is’t, that I am carried towards the West/This day, when my Soul’s form bends to the East” – taken from the poem Good-Friday, 1613, Riding Westward – is inscribed underneath the bust. Commissioned by the City of London, the sculpture was unveiled in June by the artist and Professor Peter McCullough, one of the cathedral’s Lay Canons. For more on St Paul’s, see www.stpauls.co.uk. PICTURE: Graham Lacdao / The Chapter of St Paul’s Cathedral.