This Battersea pub’s name comes from its location on land which formerly belonged to the manor of Battersea.

Located at 2 St John’s Hill (on the corner with Falcon Road, close to Clapham Junction train station), the manor was, from the 17th century, in the possession of the St John family (hence the name of the street in which it’s located).

The family crest of the St Johns features a falcon, and so we have The Falcon pub (and, of course, Falcon Road).

A pub has been located at the site for centuries (at least since 1733) but the current Grade II-listed red brick building dates from the 1896 when it was constructed as a purpose-built hotel (with a billiard room added to the rear a few years later).

Interestingly, the pub, which has a 360 degree bar apparently partly designed by renowned Dutch artist MC Escher, once held the Guinness World Record for having the longest pub counter in England.

Other interior features include a stained glass window featuring a falcon from the St John family crest.

It’s not the only pub named The Falcon in the area – there’s another (this one’s bright yellow) pub at Clapham North with the same name.

Infamous, perhaps, rather than famous, Mr Punch (one half of Punch & Judy) this year celebrated the 350th anniversary of his first public appearance in London (which, in our view, makes him an honorary Londoner!).

The first documented appearance of the hook-nosed Mr Punch – known for his acrimonious relationship with his wife Judy –  dates back to 9th May, 1662, when diarist Samuel Pepys recorded seeing a Mr Punch puppet performing as part of an Italian marionette show at Covent Garden (officially awarded a Guinness World Record title earlier this year for being the first recorded Mr Punch puppet show).

Mr Punch’s origins go back to Italy (Punchinello is thought to be an anglicised version of the character name of Pulcinella), typically wears a jester’s motley and tall, ‘sugarloaf’, hat with a tassel. Now generally a hand-puppet rather than a marionette, these days he usually performs in a mobile puppet booth with a cast of characters who as well as Judy can include a baby, a police constable and a crocodile.

Storylines – which were initially aimed at adults but are now generally aimed at children – vary but usually include references to current events (and perhaps also some mocking of public figures) and inevitably involve the unruly and often bawdy trickster, Mr Punch, doing away with his foes before uttering the line: “That’s the way to do it!” 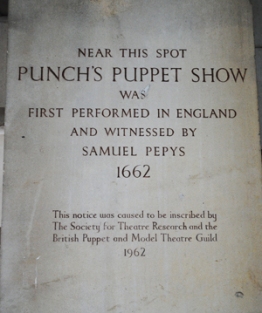 Interestingly, Punch & Judy performers refer to themselves as “professors”  – there’s a story, apparently apocryphal, that this title was granted to the performers by King Charles II thanks to his enjoyment of the show. Collecting money from an audience watching the show is known as ‘bottling’ and those who assist the professor by doing so as ‘bottlers’, thanks to the tradition of using a bottle for the task.

Mr Punch reached the height of his popularity in the Victorian and Edwardian ages and could typically be seen carrying on in seaside resorts across the country. The dramatic decline in his popularity since means it can be harder to find a Punch & Judy show today (and even when you do, much of his more brutal antics have been excised from plays so as not to offend modern sensibilities), but it’s still possible to see Punch and Judy performances in many places across the UK including, on occasion, at Covent Garden where there is a plaque (shown above) commemorating the performance seen by Mr Pepys.

Mr Punch is still celebrated every year at Covent Garden’s May Fayre and Puppet Festival (held close to 9th May – not only the day Mr Pepys saw the puppet but now regarded as Mr Punch’s ‘birthday’) and there is a fellowship of Punch and Judy performers – The Punch & Judy Fellowship – who aim to “preserve, promote and protect” the traditions of the puppet show. Punch can also be seen on the facade of the Punch Tavern in Fleet Street – the sign is pictured above (keep on eye out for our upcoming Pub Signs look at the pub’s history).