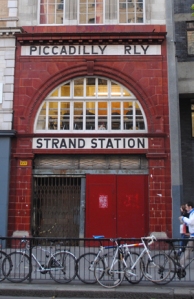 • Sixteen London Underground stations were this week listed as Grade II heritage buildings. The Tube stations – several of which were designed by Leslie Green, known for his pioneering use of ‘ox-blood’ red tiles on the exterior of stations to create a consistent brand for the stations – include the now-closed Aldwych (pictured) along with Oxford Circus (originally two stations), Covent Garden and Russell Square as well as Belsize Park, Brent Cross, Caledonian Road, Chalk Farm, Chesham, Perivale, Redbridge, St John’s Wood, West Acton and Wood Green. Three other stations – Arnos Grove, Oakwood and Sudbury Town – have had their status upgraded from Grade II to Grade II*. These three were all designed by modernist architect Charles Holden for the extension of the Piccadilly Line in the 1930s. The new listings were made by Tourism and Heritage Minister John Penrose on the advice of English Heritage.

• A new permanent exhibition showing would-be sailors what it is like to fight at sea opens at the HMS Belfast this weekend. Gun Turret Experience: A Sailor’s Story, 1943, is an immersive experience using lights, imagery, sound, smoke effects, movement and smell to recreate the atmosphere and conditions of a gun turret tower when a crew was at battle stations. Visitors are encouraged to follow the story of a young sailor on Boxing Day, 1943 when the German battle cruiser Scharnhorst is sighted leading to the Battle of the North Cape. The Gun Turret Experience, housed within the original triple gun turrets overlooking the quarterdeck, was developed with the help of Royal Navy veterans and eye-witness accounts from the Imperial War Museum (of which the HMS Belfast is part). Entry is included in normal admission price. For more information, see www.hmsbelfast.iwm.org.uk.

• Now On: See the dress the Duchess of Cambridge wore when she was married to Prince William in April at this year’s summer opening at Buckingham Palace. The gown, which features a nine foot long train, will be displayed along with the Halo Tiara until 3rd October in the palace ballroom (the same room used for the newly married couple’s reception). The exhibition features video footage of designer Sarah Burton, explaining how the dress was made. This year’s summer opening also features a display of the work of Carl Faberge – including his magnificent jewel-encrusted Imperial Easter Eggs as well as bejewelled boxes and miniature carvings of favorite pets of the royal family. More than half a million people are expected to visit the exhibition. For more information, see www.royalcollection.org.uk/default.asp?action=article&ID=30