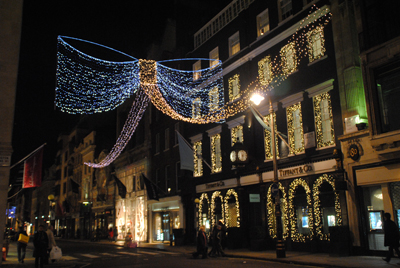 No, the name of the famous Bond Street in Mayfair has nothing to do with James Bond. Rather, the street – in fact, two streets named Old and New Bond Street – takes its name from a 17th century courtier, Sir Thomas Bond.

Bond was the comptroller of the household of Queen Henrietta Maria, then the Queen Mother thanks to being the widow of King Charles I and the mother of King Charles II. He was also something of a land developer – the head of a consortium that purchased Albermarle House from Christopher Monck, the 2nd Duke of Albermarle, in 1683.

The house was promptly demolished and the area redeveloped with what is now Old Bond Street – which runs from Piccadilly to Burlington Gardens – laid out in 1686 and given Sir Thomas’ surname (he’d died the previous year).

The northern extension of Old Bond Street (which runs from Burlington Gardens to Oxford Street) – named New Bond Street – was developed in the 1720s. Caroline Taggart, in The Book of London Place Names

, says it was residents of Old Bond Street who insisted on the use of ‘new’ in the name, no doubt to differentiate between themselves and the newcomers or, as Taggart suggests, ‘upstarts’.

Traditionally known as a location for art dealers (Sotheby’s auction house – identified by an ancient Egyptian bust of the goddess Sekhmet which sits on the facade – has stood there for more than a century), the street has become increasingly known for its luxury fashion and accessories retailers such as Asprey’s, Chanel, Cartier, Dolce & Gabbana, Bulgari and Tiffany & Co (see the Bond Street Association for more). Other landmark buildings in the street include the home of the Fine Art Society and the Royal Arcade.

Bond Street is also home to US sculptor’s Lawrence Holofcener’s work, Allies (pictured above), depicting former British PM Winston Churchill and US President Franklin D Roosevelt, and at the northern end stands the Bond Street Underground Station which opened in 1900.

Famous residents have included Admiral Horatio Nelson – who stayed at number 147 in 1797-98 while he recovered after losing his arm at Tenerife, eighteenth century satirist Jonathan Swift and politician William Pitt the Elder, as well as twentieth century spy Guy Burgess, who lived at Clifford Chambers before his defection to USSR.

Around Christmas, the street plays host to a rather special display of lights (pictured top).