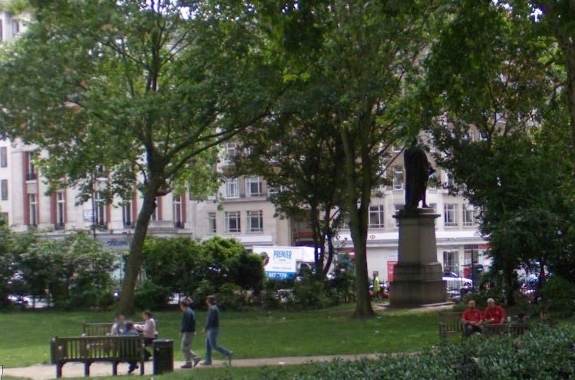 This west London square was laid out in the early years of the reign of King George I and therein lies the clue to its name.

King George I, formerly Elector of Hanover in what is now Germany, was the first king of the British House of Hanover, and had been invited to take the Crown after the last of the Stuarts – Queen Anne – died in 1714 without leaving behind any surviving children (despite the fact that she’d had 14 pregnancies and given birth to five live children, all of whom died before her).

And so it was only logical – if not a bit sycophantic – that developer Richard Lumley, the 1st Earl of Scarborough – a keen supporter of the Hanoverian succession, named Hanover Square after the new king’s royal house. Thanks to the new king sharing his name with England’s patron saint, the nearby church was also named St George’s, Hanover Square (located just to the south – pictured below) as was the street that leads to it – St George Street.

Early residents in this Mayfair square included military figures like the generals Earl Cadogan and Sir Charles Wills. The square, which features a central park, was also home to the renowned concert venue, the Hanover Square Rooms (later the Queen’s Concert Rooms) until 1900 when they were demolished (JC Bach, Haydn, Paganini and Liszt all performed here as did Mark Twain who spoke on ‘Our Fellow Savages of the Sandwich Islands’ in 1873).

The square has been pretty comprehensively reconstructed since those days and is now home almost exclusively to offices including that of the UK offices of Vogue.

Monuments in the square include a statue of former PM, William Pitt the Younger. 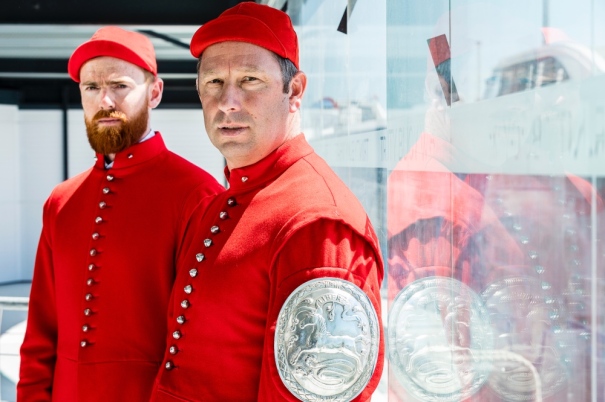 To be held from 4pm today on the River Thames, Doggett’s Coat and Badge Race is a London institution. The race originated in 1715, and sees up to six apprentice watermen (this year there are two – Alfie Anderson and George McCarthy – rowing the four mile, seven furlong course stretching from London Bridge upriver to Cadogan Pier in Chelsea (these days under 11 bridges) as they compete for the prize of a coat and badge (pictured above). The race came about thanks to Thomas Doggett, a Dublin-born actor and noted Whig, who founded it in honour of the accession of the House of Hanover – in the form of King George I – on 1st August, 1714. Doggett himself personally organised the race for the first few years before leaving provisions in his will for it to be continued. It’s been run almost every year since – there was apparently a break during World War II. While it was initially rowed against the tide, since 1873 competitors have had the luxury of rowing with it, meaning race times have dropped from what sometimes stretched to as long as two hours to between 25 and 30 minutes. This year, the event is being held as part of the Totally Thames festival which, among its packed programme of events, also features a series of exhibitions about the race – titled ‘The World’s Oldest Boat Race’, being held at various locations. PICTURES: From The World’s Oldest Boat Race exhibitions. Top – Doggett’s Coat and Badge (© Hydar Dewachi); Below – ‘Doggett’s Coat and Badge’, a coloured lithograph commissioned to mark the first publication of Guinness Book of World Records.

Perhaps not so much a sign as a pub name, the strangely monikered Doggett’s Coat and Badge in South Bank is named after a rowing race – said to be the oldest continuous sporting event in the country – in which apprentice waterman traditionally competed for a prize consisting of waterman’s coat and badge and named after Irish-born actor and theatre manager, Thomas Doggett.

The race – which is held in July and runs over a course of four miles and seven furlongs from London Bridge to Chelsea (the starting and finishing points were originally both marked by pubs called The Swan) – was first held in 1715 when it was first organised by Doggett who financed it up until his death in 1721 after which he left instructions in its will for it to be carried on by The Fishmongers’ Company (which it still is today).

While there’s a nice story that Doggett, who managed the Drury Lane Theatre and later the Haymarket Theatre and carving out a name for himself as a ‘wit’, started the race as thanks to Thames watermen for rescuing him when he fell off a watercraft while crossing the Thames, Doggett – a committed Whig – actually started the race to commemorate the ascension of King George I – the first ruler of the House of Hanover – on 1st August, 1714, following the death of Queen Anne.

This year’s race winner was Merlin Dwan (London Rowing Club) who beat four others to finish in 24 minutes, 28 seconds.

The pub, one of the Nicholson franchise, is located in a multiple storey modern building complex and sits along the course of the race in South Bank. It features a range of bars including Thomas Doggett’s Bar and the Riverside Bar as well as a dining room and other function rooms.

For more on the pub, see www.nicholsonspubs.co.uk/doggettscoatandbadgesouthbanklondon/. For more on the race (which we’ll be mentioning, along with more on Thomas Doggett, in more detail in upcoming posts), see www.DoggettsRace.org.uk.