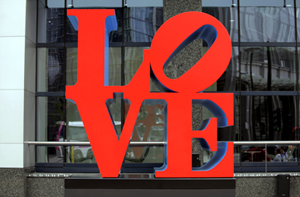 • A free outdoor exhibition of nine artworks by world famous artists can be seen in the City of London from today. Works featured in this year’s Sculpture in the City exhibition – the third year the event has run – include Robert Indiana’s iconic LOVE sculpture (found at 99 Bishopsgate), ​Shirazeh Houshiary’s five spiralling stainless steel ribbons String Quintet (St Helen’s Square), and three giant steel dinosaurs, The Good, The Bad and The Ugly, made by the Jake & Dinos Chapman (30 St Mary Axe). Other artists whose work is featured include Antony Gormley, Keith Coventry, Richard Wentworth, Jim Lambie and Ryan Gander. The works will be on display in the Square Mile for the next 12 months. For more – including the locations of all nine installations – see www.cityoflondon.gov.uk/sculptureinthecity. PICTURE: Robert Indiana ‘LOVE’ (1966)  ∏ Morgan Art Foundation, Artists Right Socienty (ARS), New York – DACS, London. Photograph – A et cetera

• The 10th Taste of London festival – London’s biggest outdoor food festival – kicks off in Regent’s Park today and runs over the weekend. This year sees amateur BBQ enthusiasts going head-to-head in a “battle of the BBQs” on Saturday while professionals will hit the grills on Sunday with the winners crowned champions of the Weber BBQ Challenge. Meantime, visitors can experience the food of 40 of the city’s top restaurants, shop at 200 food and drink stalls, enjoy fine wine tasting and watch demonstrations by some of the world’s top chefs including three generations of the Roux dynasty – Albert Roux, Michel Roux Jr and Emily Roux – as well as Rene Redzepi, Raymond Blanc, Ben Tish, Pascal Aussignac and Bruno Loubet. For more, see www.tastefestivals.com/london.

• The first ever Paddington Festival – an 11 week showcase of art and culture supported by the City of Westminster – kicks off this weekend. Events include a “puppet theatre barge” at Little Venice and a launch event featuring an appearance by Chucky Venn (Eastenders) and steelpan and performances from local dance group, The Phoenix Dancers, at the Maida Hill Market. For more on the festival and for the full programme, see www.paddingtonfestival.co.uk. Other festivals kicking off this weekend include Shubbak 2013 – an international festival of Arab culture (www.shubbak.co.uk).

• On Now: Collecting Gauguin: Samuel Courtauld in the 20s. Opening today, this exhibition at the Courtauld Gallery at Somerset House features the gallery’s collection of works by the Post-Impressionist master Paul Gauguin. The most important collection of Gauguin’s works in the UK, it was assembled by Samuel Courtauld between 1923 and 1929 and includes major paintings and works on paper by  along with one of only two marble sculptures the artist ever created. The exhibition, the gallery’s “summer showcase”, also features two important works formerly in the Courtauld’s collection and now on loan – Martinique Landscape and Bathers at Tahiti. Runs until 8th September. Admission charges apply. Meanwhile, The Courtauld Institute of Art’s MA Curating the Art Museum programme is also launching its annual exhibition, Imagining Islands: Artists and Escape, in response to the gallery’s summer showcase. A “trans-historical” exhibition displayed in two rooms, it explores artists’ fascination with other worlds and the search for utopia. Works include a 1799 engraving of Jan Brueghel the Elder’s Adam and Eve in Paradise, Barbara Hepworth’s 1957 work Icon and John Everett Millais’ 1862 painting, The Parting of Ulysses. For more, see www.courtauld.ac.uk.