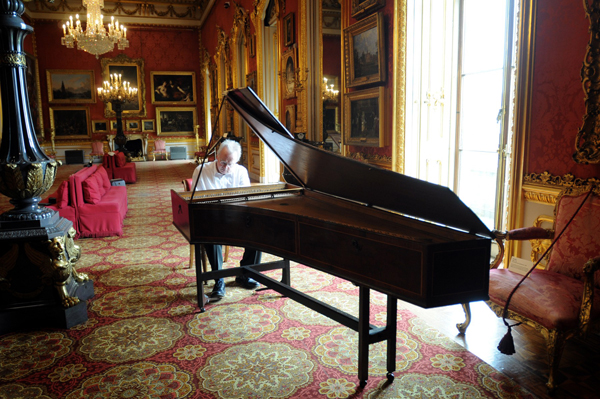 The oldest surviving English grand piano, built in London in 1772 by Americus Backers, has gone on display at Apsley House in London, home of the 1st Duke of Wellington, Arthur Wellesley.

Known to have been played by the Iron Duke’s wife Kitty (nee Pakenham), it has been suggested (although remains unconfirmed) that the piano belonged to the Iron Duke’s father, Lord Mornington, who was politician and a composer.

The piano, which has been loaned to English Heritage by Lord and Lady Douro and is expected to remain at the house for the foreseeable future, is the earliest example of a piano with loud and soft pedals and is illustrative of the impact Backers, described by some as “the father of the English grand pianoforte style”, had on the development of piano design.

While much of the detail of Backers’ life  remains obscured, he was apprenticed to a piano builder in Saxony before coming to England in the 1750s and taking up residence in Jermyn Street in 1763 where he apparently lived until his death in 1778. He is known to have built both pianofortes and harpsicords.

The piano, the only known pianoforte by Backers still existing, was previously on loan to the Russell Collection in Edinburgh.

In celebration of the return of the piano to Apsley House, the residence is hosting a special concert this Tuesday (21st May), between 7pm-9pm – the first time the piano will have been heard for at least 5o years (albeit for a short period only with most of the concert performed on a 1781 Ganer. ‘The Duke of Wellington’s Music of the French Wars’ will be held in the Waterloo Gallery. Tickets are £45 each and limited seats are available. Call English Heritage Customer Services on 0870 333 1183 for bookings or see www.english-heritage.org.uk. PICTURE:  Professor David Owen Norris, who has researched and devised the programme has been devised the programme for the evening, playing the piano.He will be joined by the soprano Amanda Pitt. Image courtesy of English Heritage. 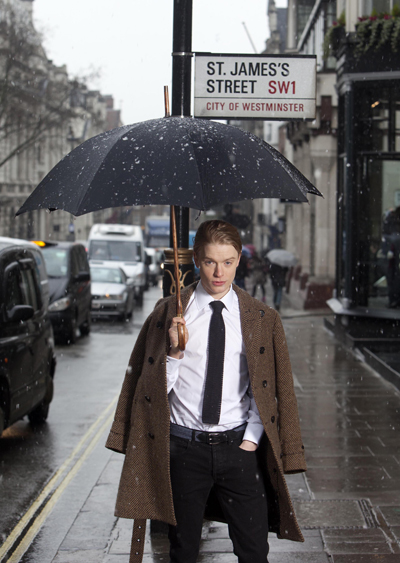 Freddie Fox (who plays Lord Alfred Douglas opposite Rupert Everett as Oscar Wilde in David Hare’s The Judas Kiss now playing at the Duke of York Theatre) marks the start of ‘White Shirt Week’ which kicked off in St James’s on Monday. The West End area is home to Jermyn Street which apparently boasts “the highest number of world renowned shirt makers on one luxury shopping street” with each shirt maker having their own signature design. While the origins of the white shirt date back as far as ancient Egypt, it was only in more recent centuries that in the UK the white shirt developed from being simply an undergarment to a fashion item in its own right – in fact, by the 19th century, the white shirt was worn by gentlemen as a statement that they weren’t engaged in manual labour and could employ servants to launder it. For more on St James’s, see www.stjameslondon.co.uk.

Generally acknowledged as having introduced the concept of men wearing a suit and tie during the Regency, ‘Beau’ Brummell’s sense of fashion continues to impact the way we dress right across the globe. 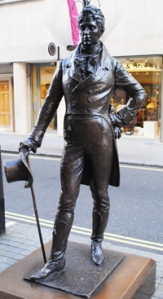 George Brummell was born in London 0n 7th June, 1788, the son of William Brummell, the private secretary of Lord North. Educated at Eton and Oxford, Brummell later joined the army and it was there that he became friends with George, Prince of Wales (the future King George IV). It was the prince who aided his promotion to captain before he resigned his commission.

Setting up home in Chesterfield Street, Mayfair, using the small fortune he inherited on his father’s death, Brummell became a member of the prince’s inner circle and quickly established a reputation for his elegant – and sober – dress sense and skills at the art of conversation.

But Brummell’s talent for spending above his means and his reckless gambling began to catch up with him as did his, at times, overly sharp tongue, and he gradually fell out of favour with his highly placed friends, including the Prince Regent whom he is said to have famously insulted after the prince snubbed him.

In 1816 he fled to France to escape debtor’s prison and remained there for the rest of his life. While friends helped him to secure the position of British consul in Caen briefly during the 1830s, he gradually slipped into decline and spent time in a French debtor’s prison until, impoverished and now insane, he died in an asylum in Caen in 1840.

Brummell, whose life has since inspired numerous books, plays and films, can be seen standing on Jermyn Street where a statue of him by Irena Sedlecka was erected in 2002 (pictured). His legacy to fashion lives on.