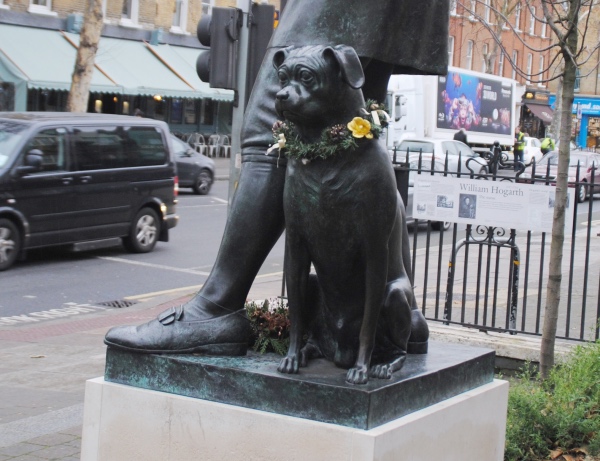 Sitting at the foot of a statue of artist William Hogarth – described on the monument as the “father of English painting” but perhaps best known today for his satirical prints such as Gin Lane – in Chiswick High Road in London’s west is his beloved pug dog, Trump.

Trump, who famously features in Hogarth’s 1745 self-portrait, The Painter and his Pug (now at the Tate Britain), was one of several pugs owned by the artist over his career.

Trump, like the other dogs, appears in several of Hogarth’s works including the self-portrait and the 1746 work Captain Lord George Graham in his Cabin, now at the National Maritime Museum.

The dog was also the subject of a terracotta sculpture by Frenchman Louis-François Roubiliac, created to accompany a bust of Hogarth in 1741. It was later reproduced in porcelain versions and plaster casts of it were sold after Hogarth’s death in 1764. While the original of sculpture of the dog is lost, the bust of Hogarth can still be seen at the National Portrait Gallery.

Hogarth is often said to have compared himself to his dogs and his close connection was noted by others who used it to make fun of the artist including Paul Sandby who, in a 1753 etching, depicted Hogarth as half-pug.

The statue, which stands opposite the intersection with Turnham Green Terrace, is located not far from the country retreat where Hogarth lived – splitting his time between it and his Leicester Square townhouse – between 1749 and his death (now a museum known as Hogarth’s House; the artist is also buried nearby)

The work of Jim Matheison, it was unveiled by Ian Hislop and David Hockney in 2001.