• A ‘pop-up’ World War I mail sorting office will appear in The Regent’s Park this Saturday as part of centenary commemorations of the Great War. The office evokes the giant wooden building known as the ‘Home Depot’ which was located in the park and which handled all the mail from and to the front line during the war – some two billion letters and 140 million parcels. Believed to have been the largest wooden building in the world, it covered at its greatest extent more than five acres. The sorting office provides visitors with an immersive experience as it brings to life the story of the 2,500 people who worked there and visitors can even work a shift as part of an interactive session led by The Postal Museum. There’s a chance to write a postcard to a soldier or postal worker to give them your thoughts on the war and outdoors, there’s a display on the role the Post Office played in keeping the war running. The sorting office can be visited for free this Saturday, 12th May, and Saturday, 19th May. For more, follow this link.

• Two new acquisitions – the first ever painting by Spaniard Juan de Zurbarán to enter a UK collection and a teenage work by portraitist John Singer Sargent – have gone on show at the The National Gallery on Trafalgar Square. The rather long titled Still Life with Lemons, Lilies, Carnations, Roses and a Lemon Blossom in a Wicker Basket, together with a Goldfinch perched on a Porcelain Bowl of Water, on top of a Silver Tray, all arranged upon a Stone Ledge was painted by Baroque artist de Zurbarán in about 1643–49 while Wineglasses was painted by Sargent at the age of 19, probably at St-Enogat in Brittany where he spent the summer of 1875 having just seen his first Impressionist exhibition in Paris. Still Life with Lemons in a Wicker Basket can be seen in Room 30 while Wineglasses is in Room 44. Admission is free. For more, see www.nationalgallery.org.uk. PICTURE: Wineglasses, John Singer Sargent, RA (1856–1925) Probably 1875  © The National Gallery, London.

• On Now – 50 Glorious Shows! The Cartoon Museum is this year celebrating 12 years at 35 Little Russell Street in Bloomsbury and to mark the occasion, this display features more than 170 original works which have been highlights in previous exhibitions. Among those whose work is represented are masters of the British tradition of cartooning like Hogarth, Gillray, Tennial and EH Shepard as well as that of top comic artists and graphic novelists like Dudley D Watkins, Posy Simmonds and Bryan Talbot. There’s also a selection of political satire and caricature. The show runs until 2nd September. For more, see www.cartoonmuseum.org.

• The lives of three German princesses whose marriages into the British royal family during the Georgian era placed them right at the heart of progressive thinking in 18th century Britain are the subject of a new exhibition which opens at Kensington Palace today. Enlightened Princesses: Caroline, Augusta, Charlotte and the Shaping of the Modern World looks at how these three women – committed patrons of the arts and sciences – “broke the mould” in terms of their contributions to society, through everything from advocating for the latest scientific and medical advances to supporting the work of charities, changing forever the role women played in the British royal family. Caroline and Charlotte became queens consort to King George I and King George III respectively while Princess Augusta was at various times Princess of Wales, Regent and Princess Dowager (as mother to King George III) and between them, they had more than 30 children. But alongside their busy family lives, they also were at the centre of glittering courts where the likes of writers Alexander Pope and Jonathan Swift, scientist Isaac Newton and composer George Frideric Handel as well as successive Prime Ministers and international statesmen were welcomed. The display features almost 200 objects owned by the princesses, such as Charlotte’s hand-embroidered needlework pocketbook, pastels painted by their children and artworks and fine ceramics commissioned by some of the greatest artists and craftsmen of their day. The exhibition, which has previously been at the Yale Center for British Art, runs until 12th November. Admission charge applies. For more, see www.hrp.org.uk/kensington-palace/. 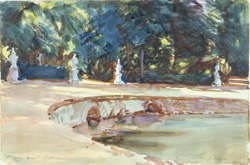 • The UK’s first major exhibition featuring the watercolours of Anglo-American artist John Singer Sargent in almost 100 years has opened at the Dulwich Picture Gallery in south London. Sargent: The Watercolours features almost 80 works produced between 1900 and 1918, what was arguably his greatest period of watercolour production. Sargent mastered the art during expeditions in southern Europe and the Middle East and the show features landscapes, architecture and figurative scenes, drawing attention to the most radical aspects of his work – his use of close-up, his unusual use of perspective and the dynamic poses of his figures. The works include The Church of Santa Maria della Salute in Venice (c1904-1909), the mountain landscape Bed of a Torrent (1904), and figure study The lady with the umbrella (1911). The exhibition runs until 8th October. Admission charge applies. For more, see www.dulwichpicturegallery.org.uk. PICTURE: John Singer Sargent – Pool in the Garden of La Granja, c. 1903, Private Collection

• The 249th Summer Exhibition has opened at the Royal Academy with Mark Wallinger, Yinka Shonibare and Antony Gormley among those with works on show. About 1,200 works are featured in the display with highlights including Shonibare’s Wind Sculpture VI, a new large scale work from Gilbert & George’s ‘Beard Speak’ series and, for the first time, a focus on construction coordination drawings, showing the full complexity of a building, in the Architecture Gallery. Runs until 20th August. Admission charge applies. For more, see www.royalacademy.org.uk.

• A major exhibition of the works of John Singer Sargent has opened at the National Portrait Gallery off Trafalgar Square this week. Sargent: Portraits of Artists and Friends – which has been organised in conjunction with the Metropolitan Museum of Art in New York – brings together a collection of the artist’s intimate and informal portraits of his friends including Robert Louis Stevenson, Claude Monet and Auguste Rodin. Sargent (1856-1925), born the son of an American doctor in Florence, studied in Italy and France before scandal led him to move to England where he established himself as the country’s leading portrait painter. He made several visits to the US during his career, painting portraits as well as decorative paintings for public buildings including the Boston Public Library and Museum of Fine Arts. The exhibition runs until 25th May. Admission charge applies. For more, see www.npg.org.uk. PICTURE: Courtesy of the Taft Museum of Art, Cincinnati, Ohio

• It’s Chinese New Year and the celebrations kick off in London’s Chinatown in Soho this Sunday. The day starts with a parade at 10am which runs from Duncannon Street to Shaftesbury Avenue featuring floats and Chinese lion and dragon teams. It will be followed by a free programme of events in Trafalgar Square which, starting at noon, include music, dance, acrobatics and martial arts. Other events are taking place at a range of locations across the West End. For more information, check out www.london.gov.uk/get-involved/events/chinese-new-year-2015.

• Ever wondered how your appetite is shaped by food? A new free exhibition at the Science Museum in South Kensington, Cravings: Can Your Food Control You? explores how the brain, ‘gut brain’ and bacteria influence our diets. Along with personal stories and objects as well as the use of science and tech to present the display, those who attend the exhibition will also be able to take part in a ground-breaking neurogastronomy experiment to explore how our senses influence appetite (the experiment is also available online – follow the link below). There’s also a digital quiz where you can consider the ethical challenges that cravings, appetite control and food regulations pose. Runs until January next year. For more, see www.sciencemuseum.org.uk/cravings.

• The history of the Foundling Hospital’s Boy’s Band is the subject of a display at the Foundling Museum in Bloomsbury. Foundlings at War: Military Bands is part of a series of exhibits supported by the Heritage Lottery Fund exploring the hospital’s links with the military. The Boy’s Band was established in 1847 and boys who joined increasingly went on to serve in the military. Runs until 10th May. For more, see www.foundlingmuseum.org.uk. 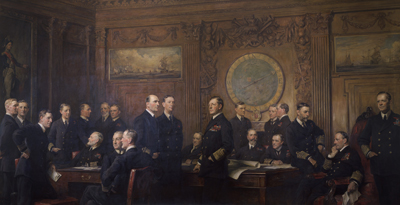 Hidden away in storage for decades, this sizeable portrait of 22 senior navy figures of World War I has recently gone on public display at the National Portrait Gallery as part of the institution’s commemoration of the centenary of the outbreak of the Great War. The work of Sir Arthur Stockdale Cope, Naval Officers of World War I was painted in 1921 and had been in storage due to its “delicate condition”. Using £20,000 raised through a public appeal last year, the painting and its frame have recently gone five months of restoration work which has seen it restored to health. The painting was one of three commissioned by financier and public servant Sir Abraham Bailey in the aftermath of the war – both of the other two paintings, Sir James Guthrie’s Statesmen of World War I and John Singer Sargent’s General Officers of World War I are continuously on display in Room 30. Among those depicted in Cope’s work are Admirals Jellicoe and Beatty and Rear-Admiral Hood. The work, which measures more than five metres across, can be seen in Room 32 of the National Portrait Gallery, just off Trafalgar Square. Admission is free. For more, see www.npg.org.uk. PICTURE: © National Portrait Gallery, London