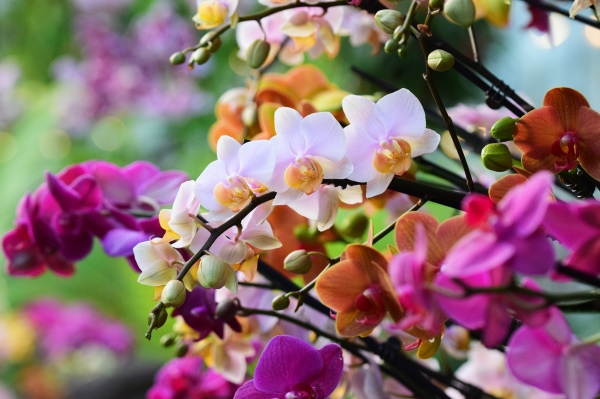 The 24th annual Kew Orchid Festival is underway in west London with displays inspired by the flora and fauna of Colombia. For more, see www.kew.org. PICTURES: Above – Orchid stems (Ines Stuart Davidson); Below – A jaguar prowls among the orchids (photo by Jeff Eden); The Legend of El Dorado in a yellow orchid display (Jeff Eden); A sloth in a “carnival of animals” (Jeff Eden); and, Vanda orchids in a display representing the rainbow river, Cano Cristales (Jeff Eden). All pictures courtesy of Kew Gardens. 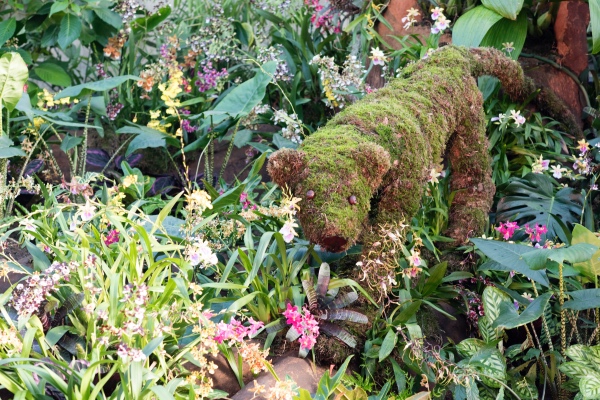 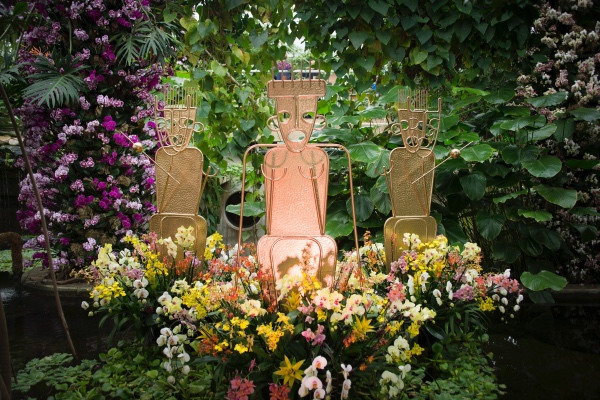 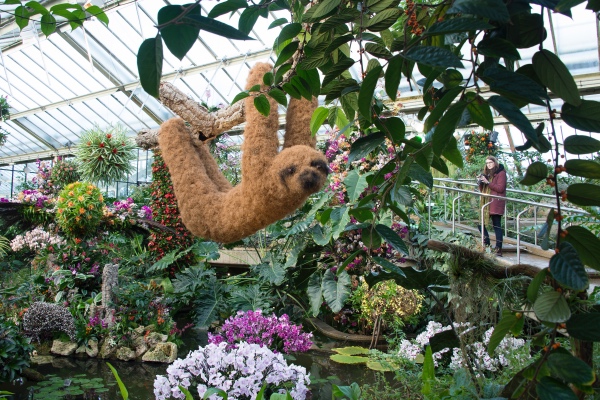 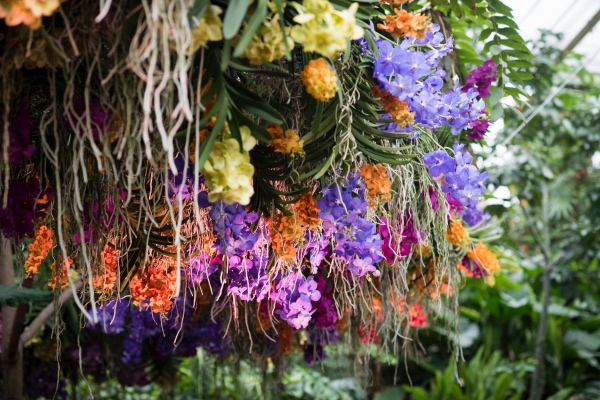 • The flowers of Colombia are at the heart of this year’s Kew Orchid Festival which kicked off in west London late last week. Featuring what’s promised to be “dazzling displays” inspired by Colombia’s fauna and flora – the country boasts some 4,270 species of orchids alone, the 24th annual festival includes music, food, crafts and, of course, coffee. More than 5,700 orchids – including the Flor de Mayo – feature in the display in the Princess of Wales Conservatory with visitors led through a series of zones that evoke the sights, smells and sounds of Colombia. The central display is a “carnival of animals’ which depicts a toucan in flight, a hanging sloth and swimming turtle – all made of orchids, bromeliads and other tropical plants. There’s also a cascade of colourful hanging vandas representing the “rainbow river” – the Cano Cristales, an enchanted forest with life-sized jaguars, and, a golden floating display featuring yellow orchids depicting the legend of El Dorado. Meanwhile, the glasshouse film room features Bogota-style street art murals by Colombian multidisciplinary artist, Vanessa Moncayo González. The festival runs until 10th March. Admission charges apply. For more, see www.kew.org. 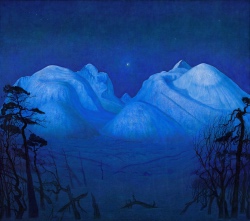 • The works of Harald Sohlberg, one of the great masters of landscape painting in the history of Norwegian art, are on show at Dulwich Picture Gallery in the first ever exhibition of his works outside of Norway. Marking the 150th anniversary of the artist’s birth, Harald Sohlberg: Painting Norway boasts more than 90 works revealing the role of colour and symbolism in his art as well as his passion for Nordic landscapes. Spanning the period from 1889 when he was starting out as a 20-year-old through to 1935, the last year of his life, the works include the ‘national painting of Norway’ – Winter Night in the Mountains (1914) which took some 14 years to complete (pictured), as well as Fisherman’s Cottage (1906), Summer Night (1899), Sun Gleam (1894) and Street in Røros in Winter (1903). Runs until 2nd June. Admission charge applies. Accompanying the exhibition is a new sculptural installation in the gallery’s mausoleum by Bristol-based artist Mariele Neudecker – And Then the World Changed Colour: Breathing Yellow. For more see www.dulwichpicturegallery.org.uk. PICTURE:  Harald Sohlberg, ‘Winter Night in the Mountains’, 1914, The National Museum of Art, Architecture and Design, Norway.

• A new photographic exhibition documenting the living conditions of London’s most disadvantaged children has opened at the Foundling Museum in Bloomsbury. Being run in partnership with The Childhood Trust, Bedrooms of London features images of sleeping spaces by Katie Wilson and they are shown alongside stories collected by Isabella Walker which bring into sharp focus the consequences of London’s social housing shortage. The display builds on the history of the Foundling Hospital, providing a glimpse into what life is like for the 700,000 London children currently living below the poverty line. It can be seen until 5th May. Admission charge applies. For more, see www.foundlingmuseum.org.uk.