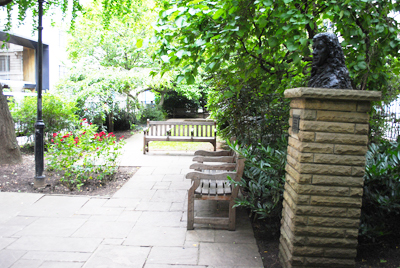 This small, simply laid out garden in the City of London is redolent with history.

It was once the site of the Navy Office, the workplace of diarist Samuel Pepys, and it was in the garden of this building that he and Sir William Penn buried their wine and parmesan cheese for safety during the Great Fire of London in 1666.

The office survived the Great Fire but was, oddly enough, destroyed by fire only a few years later in 1673 (there is a blue plaque commemorating it in the garden) and a new office, designed by Sir Christopher Wren, was built here in the early 1680s before it was demolished in 1788.

It’s due to its association with Pepys (who also lived in the street and was buried in the nearby church of St Olave Hart Street) that it boasts a bronze bust of him which was erected by the Samuel Pepys Club in 1983, designed by Karin Jonzen and funded by public subscription. It was presented to the garden by Fred Cleary who played an instrumental role in encouraging green spaces in the Square Mile in the 1970s.

The garden, which was laid out in about 1950, is also notable for its beds of red roses, planted to commemorate the deal struck in 1381 in which the Sir Robert Knollys was belatedly granted permission for a footbridge his wife had built over Seething Lane. She had done so contrary to planning rules while he was away fighting with John of Gaunt (ostensibly so she could avoid the dust of the street when crossing from her house to her rose garden), and so when he returned, the City of London Corporation allowed the bridge (now long gone) to remain, but only in exchange for the symbolic “penalty” of one red rose a year.

The occasion is still marked each June in a ceremony overseen by the Company of Watermen and Lightermen of the River Thames in which a red rose is plucked from the garden and delivered to the Lord Mayor of London at Mansion House.

This garden reopened in 2018 after being redeveloped as part of the Trinity Square redevelopment.

A London tradition which has its origins in the fourteenth century, the Knollys Rose Ceremony surrounds the presentation of a single red rose to the Lord Mayor of London at Mansion House.

The ceremony, which was held in the City yesterday, relates to a judgement of 1381 in which the fine was the annual payment of a single red rose.

The fine was levied after Lady Constance Knollys, the wife of prominent citizen Sir Robert Knollys, bought a property opposite her own in Seething Lane and then added a footbridge linking the two without first gaining planning permission (it’s suggested that she bought the property which had previously been used as a threshing ground because she was annoyed with the constant chaff in the air).

Following discovery of her breach, it was agreed that she would pay the annual ‘peppercorn rent’ of a single red rose from the new property’s garden to the Lord Mayor.

Lady Constance’s footbridge is long gone but the tradition of paying the annual rent was revived last century and is now presided over by the Company of Watermen and Lightermen of the River Thames.

The ceremony starts at the church of All Hallows by the Tower and then involves a procession to Seething Lane Gardens (a modern garden close to where the original may have been; the gardens were once the site of the Navy Office) where the Master of the Company of Watermen and Lightermen snips off a rose before heading on to Mansion House where it is presented to the Lord Mayor on a velvet altar cushion from All Hallows.

The ceremony usually takes place on the second Monday in June.