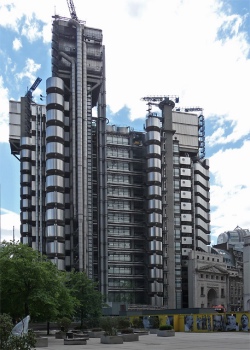 This iconic building – home to the venerable insurance firm Lloyd’s of London – stands on the former site of East India House on the corner of Lime and Leadenhall Streets in the City of London.

Designed by the Richard Rogers Partnership (now Roger Stirk Harbour + Partners) in conjunction with structural engineers Arup, this 12 storey building – which features galleries adjoining a series of towers located around a central, glass-topped atrium – was completed in 1986 after eight years of construction. The £75 million building was officially opened by Queen Elizabeth II.

Among its most famous innovations is the location of services – including lifts, toilets and tubes containing wiring and plumbing – on the exterior of the building in an effort to maximise space inside (inviting comparisons with the Centre Pompidou in Paris, which Rogers was involved in the design of, along with Renzo Piano, prior to working on this building).

The building incorporates – in Leadenhall Street – part of the facade of the previous Lloyd’s building which had occupied the site since 1928 (the corporation had been founded in 1688 in Tower Street by Edward Lloyd and endured several moves before coming to its current home).

The 11th floor Committee Room incorporates the Adam Great Room, an adaptation of the original dining room from Bowood House in Wiltshire which was designed by Robert Adam for the 1st Earl of Shelbourne. It was purchased from Bowood in 1956 and incorporated into Lloyd’s former Heysham building before being moved into the current building.

Also present in the building, hanging from the Rostrum on the ground floor, is the famous Lutine Bell. It was recovered from the wreck of HMS Lutine – lost at sea with all hands and cargo in 1799 and, as a result, the subject of a claim against Lloyd’s which was paid in full – in 1859 and has since graced Lloyd’s underwriting rooms. While it was formerly rung to announce when news of an overdue ship arrived – once for a loss, twice for its safe return – these days it is only used on ceremonial occasions.

The building’s futuristic and iconic look meant it’s served as a location in numerous films including 2014’s Guardians of the Galaxy, Mamma Mia (2008) and The Ghost Writer (2010). It has also, in recent years, attracted climbers, leading Lloyd’s to seek an injunction to prevent such actions.

Credited as “the man who invented Christmas”, Victorian author Charles Dickens’ featured Christmas celebrations in many of his works – but none more so than in his famous story, A Christmas Carol.

Published 172 years ago this December, the five part morality tale centres on the miserly Londoner Ebenezer Scrooge who, following several ghostly visitations by the likes of the Ghosts of Christmas Past, Present and Yet to Come, becomes a changed man and recaptures the essence of what Christmas is all about.

The book – whose characters (said to have been partly based on people he knew in real life) also include the abused clerk Bob Cratchit and his ever positive youngest son, Tiny Tim – is based in London.

Among key locations mentioned in the book is Scrooge’s counting house, said to have been located in a courtyard off Cornhill (it’s been suggested this is Newman’s Court, thanks to a reference to a church tower, believed to be St Michael’s Cornhill – pictured), the home of Scrooge (it has been speculated this was located in Lime Street), and the home in Camden Town where the Cratchits celebrate their Christmas (perhaps based on one of Dickens’ childhood homes in Bayham Street). City of London institutions like the home of the Lord Mayor, Mansion House, and the Royal Exchange are also mentioned.

The book, which apparently only took Dickens six weeks to write while he was living at 1 Devonshire Terrace in Marylebone, was first published on 19th December, 1843, by London-based firm Chapman & Hall. Based at 186 Strand, they published many of Dickens’ works – everything from The Old Curiosity Shop to Martin Chuzzlewit – along with those of authors such as William Makepeace Thackeray and Elizabeth Barrett Browning.

A Christmas Carol‘s first print run of 6,000 sold out any Christmas Eve that same year and sales continued to be strong into the following year. Despite its warm reception by critics and popularity among the public, the book’s profits were somewhat disappointing for Dickens who had hoped to pay off his debts (he also lost out when he took on some pirates who printed their own version two months after its publication; having hauled them to court Dickens was apparently left to pay costs when they declared bankruptcy).

Dickens would later give some public readings of the book, most notably as a benefit for the Great Ormond Street Hospital for Sick Children (his last public reading of the book took place at St James’s Hall in London on 15th March, 1870, just three months before his death).

The book, which has apparently never been out of print, went on to become something of a Christmas classic and has been adapted into various films, theatre productions, radio plays and TV shows (one of our favourites is The Muppet Christmas Carol, dating from 1992). 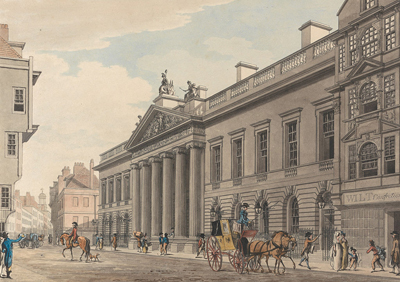 The headquarters of the East India Company, the ‘New’ East India House, was built in the 1720s at the corner of Leadenhall and Lime Streets on the site of what had been a late Elizabethan mansion known as Craven House.

The company, which was founded in 1600, was housed in several different properties (including Crosby Hall – now located at Chelsea) until it moved into Craven House in 1648 – built by a former Lord Mayor, Sir Robert Lee, and named after one of its later occupants Sir William Craven. In 1661 an ornamental wooden structure featuring paintings of some of the Company’s ships and a wooden sculpture of a seaman, was added to the facade of the building.

By the 1720s, the mansion was crumbling and so construction began on a new building on the site designed by Theodore Jacobsen (the Company was relocated to a temporary premises in Fenchurch Street while it was built).

The three storey building on Leadenhall Street was designed with five bays and beyond the facade featured grand meeting rooms including the Directors’ Court Room, offices for the directors as well as a hall, courtyard, garden and warehouses. Famous art works inside included the fresco The East Offering its Riches to Britannia by then little known Greek artist Spiradone RomaThe East Offering its Riches to Britannia which once adorned the ceiling of the Revenue Committee Room (it’s now in the collection of the British Library).

The building was renovated and extended significantly in the 1790s creating what was essentially a grand new neo-classical building. Among the new additions – although it seems a matter of some debate the building was apparently designed by Henry Holland with the work was overseen by the Company’s surveyor Richard Jupp until his death in 1799 – were a museum and library. A new pediment topped by Brittania dominated the facade.

When the East India Company was wound up in 1858 after the Indian Mutiny its assets were transferred to the government and the building briefly became home to the India Office (which subsequently moved to a new purpose-built building which still stands in Whitehall).

In 1861, the building was sold for redevelopment and subsequently demolished. Many of its fittings, art collection and furnishings were transferred elsewhere including the British Library, V&A and the Foreign and Commonwealth Office in Whitehall where many of the fittings of the Directors’ Court Room – including a great marble chimneypiece – were reused.

The location of the property is now covered by the landmark Lloyd’s building with little to indicate such a grand premises had once stood here.

He lends his name to one of London’s best small museums but who was the person behind the name the Geffrye Museum? 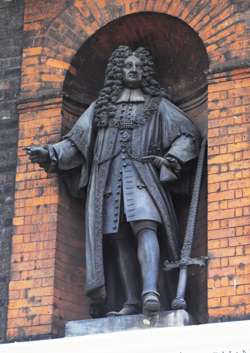 Details about his life are somewhat scant but it is generally believed Sir Robert Geffrye (among a number of variants of the spelling of his name) was born around 1613 in the village of Landrake near Saltash in Cornwall.

Moving to London while still just in his teens, he is believed to have undertaken a seven year apprenticeship, eventually admitted as a member of the Worshipful Company of Ironmongers and freeman of the City of London.

It’s been suggested he was an ironmonger in name only but it seems to be the case that his new status gave him the opportunity to launch his career as a merchant and he apparently made a fortune from investing in African and East Indian trade.

Geffrye – who married Priscilla Cropley, a lawyer’s daughter, at the chapel in the Mercer’s Hall in Cheapside in 1651 and lived in Lime Street – was twice Master of the Worshipful Company of Ironmongers (first in 1667 and then again in 1685).

He was knighted by King Charles II in 1673 (his coat-of-arms can still be seen in the Ironmonger’s Hall) and in 1674, he was appointed a sheriff of London before being elected Lord Mayor in 1685 (his wife Priscilla had died in 1676).

In 1688, Geffrye became president of Bridewell and Bethlehem Hospitals – a role which he held for two years and which apparently saw him attending Bridewell every Friday to judge and sentence prisoners.

He died in February 1704 and was buried in the now long-gone St Dionis Backchurch, where his wife had been buried earlier. Their remains were transferred to the almshouses grounds after the church was demolished in 1878.

Geffrye left behind a substantial fortune and, along with bequests to family, friends and charities, he made a sizeable bequest which funded the building of 14 almshouses in Shoreditch (now home to the Geffrye Museum which this year celebrates its tercentenary) (for more on the museum and alms houses, see our earlier posts here and here).

A replica of an original 1723 statue of Sir Robert still adorns the almshouses which bear his name (pictured above).

For more on the people that made London, see Boris Johnson’s Johnson’s Life of London: The People Who Made the City That Made the World