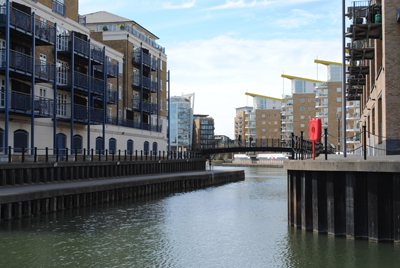 This part of East London is believed to take its name not from lime trees nor from a house bearing that name. Rather it owes its origins to the process by which chalk shipped from Kent was converted into lime.

The process of ‘lime burning’ – which took place in these parts on the northern bank of the River Thames – involves heating the chalk in a bottle-shaped kiln, also known as an oast. Hence ‘lime oast’ became corrupted into Limehouse. 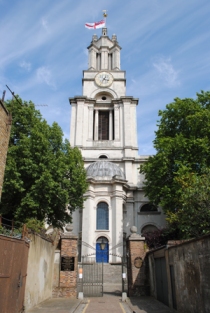 The area, which became increasingly industrialised as a result, is also known for its links to the Chinese community – and this included, in the Victorian era, opium dens, but the association ended around the 1950s by which time the Chinese community had largely moved to Soho (where Chinatown still stands today).

Among the area’s most prominent buildings are the Nicholas Hawksmoor-designed church, St Anne’s Limehouse (pictured), and the historic pub, The Grapes. 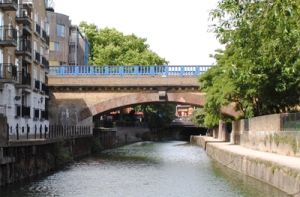 London’s oldest canal is one that perhaps doesn’t immediately spring to mind when considering the city’s waterways – the Limehouse Cut in the city’s east.

Authorised by an Act of Parliament passed in 1766, the Cut was built in 1770 to link the River Lea (or Lee) – which it joins at Bromley-by-Bow – to the Thames at Limehouse.

It was designed to enable sailing barges coming down the Lee to avoid navigating the rather difficult curves in the lower reaches of the river at Bow Creek (and waiting for the tide to come in to the Thames so the barges could then go around the Isle of Dogs to the docks).

In 1968, the exit lock which led from the cut directly to the Thames was replaced by another short section of canal which linked it to what is now known as Limehouse Basin and was previously known as Regent’s Canal Dock.

The cut these days features an innovative floating towpath which leads under the A12, the northern approach road of the Blackwall Tunnel, and the old factory buildings which once lined it are giving way to modern apartment complexes and office blocks. Pictured is a section of the Limehouse Cut near the Limehouse Basin end.