So we come to the end of our series of 10 of London’s most curious (and historic) graves. Here’s a recap before we start our new series next week… 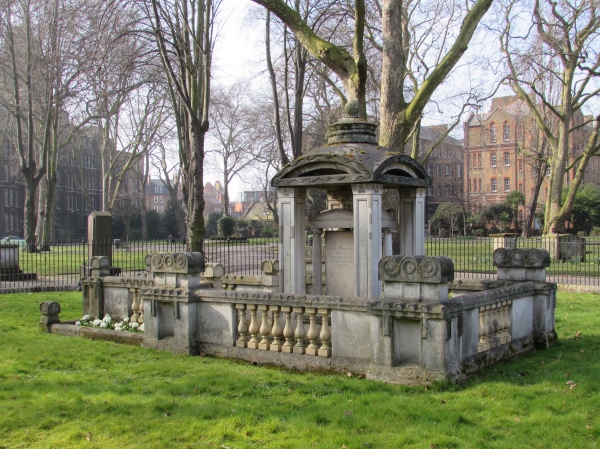 It should probably come as no surprise that this rather elegant memorial in the former graveyard of St Pancras Old Church is that of architect – and founder of a rather remarkable museum – Sir John Soane (as well as his wife Eliza and their oldest son, John).

The tomb, described by architectural commentator Nikolaus Pevsner as an “outstandingly interesting monument”, was, of course, designed by the heart-broken Soane, the architect of neo-classical buildings like the Bank of England and Dulwich Picture Gallery, following the death of his wife on 22nd November, 1815.

Erected in 1816, it features a central cube of Carrara marble with four faces for inscriptions topped by a domed canopy supported on four ionic columns. A Portland stone balustrade surrounds the whole structure as well as stairs down to the subterranean tomb itself.

Among the symbolic decorative elements on the monument are a pine cone finial – a symbol of regeneration, a serpent swallowing its tail – a symbol of eternity, and reliefs of boys holding extinguished churches – symbols of death.

Sir John’s son, John, was buried in the tomb after his death in 1823 and Sir John himself was interred following his death on 20th January, 1837.

The monument is said to be only one of two Grade I-listed monuments in London – the other being Karl Marx’s gravestone in Highgate Cemetery. It is also famously said to have formed part of the inspiration for Sir Giles Gilbert Scott’s design of famous K2 red telephone box.

The Soane tomb was vandalised in 1869 – and it was suggested at the time that it should be relocated to Lincoln’s Inn Fields for its protection.

It was more recently restored in 1996 by the Soane Monuments Trust and again, after more vandalism, in 2000-01 as part of a restoration of St Pancras Gardens by the London Borough of Camden.

The graveyard of St Pancras Old Church, incidentally, is also the site of The Hardy Tree.

One of the more uniquely designed tombs in London, that of Victorian explorer, soldier, linguist and diplomat Sir Richard Burton (1821-1890; not to be confused with the actor of the same name) was created in the shape of a Bedouin tent.

Located in the cemetery of St Mary Magdalen Roman Catholic Church in Mortlake in south-west London, the Grade II* tomb was designed by Burton’s strongly Catholic wife, Isabel, Lady Burton (1831-96), who is buried in it with him (his body was brought back from Trieste, Italy, where he expired; hers added after he death several years later). The tent’s form was apparently inspired by one the couple stayed in during a visit to Syria.

The tomb, which is constructed of stone from the Forest of Dean and Carrara marble and topped with two gilt stars, looks a fitting tribute for Burton who not only took part in the search for the source of the Nile but also scandalously translated the texts The Arabian Nights, The Perfumed Garden and The Kama Sutra into English.

The coffins of the couple can be seen inside the tomb through a large window in the rear of the roof which is accessed by a short ladder. The interior is also decorated with a range of items including religious paintings, statues and other items symbolic of the Catholic faith as well as strings of camel bells.

The inscription on the front of the mausoleum features a commemorative sonnet by poet Justin Huntly McCarthy as well as the inscription, “This monument is erected to his memory by his living countrymen”.

The interior of the church also features a memorial to Burton (who actually described himself as an atheist). It takes the form of a stained glass window which depicts Burton as a medieval knight.

Located in Bunhill Fields Burial Ground in City Road, this memorial to Daniel Defoe, the author of numerous books including Robinson Crusoe and Moll Flanders as well as a journalist, pamphleteer and ‘provocateur’ or spy, wasn’t erected until 1870, almost 140 years after his death.

After he died in 1731 at the age of 70, Defoe was among the more than 120,000 people buried in Bunhill Fields, a Nonconformist cemetery which opened in 1665 and had closed by 1853. He was apparently buried under the name Dabow, thanks to a spelling mistake made by the gravedigger. 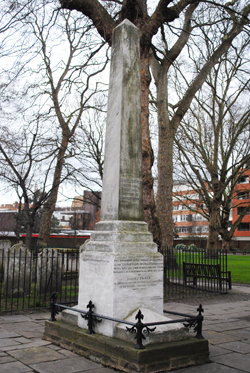 When he died in relative obscurity (he was believed to have been hiding from his creditors at the time), his fame rose after his death – due in large part to the rising popularity of Robinson Crusoe, and by the mid-19th century, it was believed that the simple headstone over his grave didn’t do justice to him.

Hence an appeal was run by children’s magazine Christian World for a more suitable memorial for the writer – named as Daniel De-Foe on the memorial – and more than £150 was raised from 1,700 people, an amount which apparently exceeded expectations.

Sculptor Samuel Horner was subsequently commissioned to carve the memorial obelisk, which features projections at the base resembling a coffin lid, to the designs of CC Creeke of Bournemouth. It was unveiled on 16th September, 1870, in a ceremony attended by three of Defoe’s great grand-daughters.

There was apparently a newspaper story that the sculptor uncovered a coffin bearing Defoe’s name in preparing the site for the monument and had to get the aid of police to prevent watchers from making off with the bones from within.

The monument, which may not mark the exact location of Defoe’s grave site due to the movement of graves in the burial ground, is now Grade II*-listed (and the burial ground itself Grade I-listed). Others buried at Bunhill Fields include author John Bunyan, artist William Blake and Susanna Wesley, mother of John Wesley, founder of Methodism.