With the announcement of the second national lockdown and the temporary closure of institutions across the city, we’re again shifting our focus back to online events for the next few weeks. In the meantime, we hope you enjoy our new look (we’ll be doing a bit of experimenting over the next week or two) – and here’s the next couple of entries in the special “most popular posts” countdown we’re running to mark our 10th birthday this year… 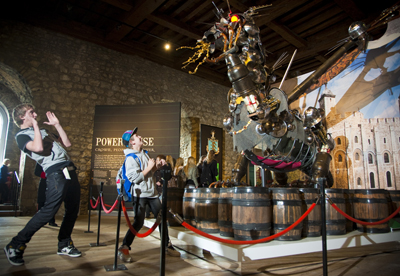 London’s oldest museum is not the British Museum or any of the Kensington museums but is actually contained within one of the city’s iconic structures.

Located within the Tower of London, the Royal Armouries Museum takes the prize of being not only the city’s oldest museum but oldest museum in the whole of Britain.

It’s origins go back to medieval times when the tower housed the main royal arsenal and was a working armoury and, by the time of the Restoration, there was a permanent public display in the White Tower with the star attractions being the Spanish Armoury, a collection of weapons and torture instruments claimed to have been taken from the Spanish Armada of 1588, and the Line of Kings (see our earlier post on this here).

Other displays – including one focused on artillery and another on horses – were subsequently added in various buildings within the tower precincts including in the Grand Storehouse which, located to the north of the White Tower, destroyed by fire in 1841. Over the ensuing years, the displays were moved back into the White Tower.

As well as the revamped Line of Kings and the Power House exhibition looking at the people, institutions and history of the Tower, the current display includes a dragon made of more than 2,600 items of weaponry, following a long-standing tradition in the museum of creating displays out of masses of weapons.

As well as continuing its presence at the Tower of London, the museum is now also housed at Fort Nelson at Portsmouth – this opened in 1995 when it became home to the museum’s artillery collection – and in Leeds, which opened in 1996. There’s also some weapons on display in Louisville, Kentucky, in the US, under a  cooperative agreement with the Frazier International History Museum.

PICTURE: ‘Keeper’, the Dragon trophy – part of the Power House display in the Royal  Armouries Museum at the Tower of London. HRP newsteam.