Located just off Liverpool Street in Old Broad Street in the City, The Lord Aberconway is named after the last chairman of the Metropolitan Railway Company, operator of the world’s first underground railway (keep an eye out for our extended piece on the history of the Underground later this week). 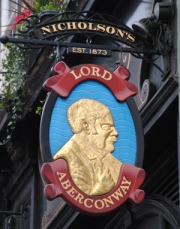 While the current building – the interior of which features booths and an L-shaped bar – dates from the 19th century, there has been a pub on the site, close to Liverpool Street Station, for much longer and its previous names included the King and Keys and the Metropolitan Railway’s ‘Refreshment Room’ and ‘Railway Buffet’.

The pub, which stands not far from the Monument commemorating the Great Fire of London, is reputed to be haunted by victims of the fire (only four people are said to have officially died in the blaze but it’s believed the death toll would have actually been much higher). You’re more likely to see city traders there however.

The pub is now run by the Nicholson’s. For more on the Lord Aberconway, see www.nicholsonspubs.co.uk/thelordaberconwayliverpoolstreetlondon/.