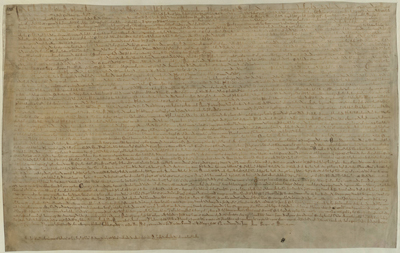 We interrupt our regular programming today to mark a truly historic milestone – 800 years since King John set his seal to the Magna Carta (Great Charter) in a field at Runnymede to the west of London.

So, where can you see a copy in London?

The British Library actually holds two of the four surviving documents from 1215 (one is pictured above) – the other two are held by Lincoln and Salisbury Cathedrals.

One of the copies in the British Library was damaged in an 18th century fire; the other was found in a tailor’s shop in London in the 17th century – made of sheepskin, it was apparently about to be taken apart to line collars.

The library’s current Magna Carta exhibition, Magna Carta: Law, Liberty, Legacy, features the two documents (along with Jefferson’s handwritten copy of the Declaration of Independence and one of the original copies of the US Bill of Rights). For more about the exhibition, see www.bl.uk/events/magna-carta–law-liberty-legacy (runs until 1st September – for more see our earlier post here).

Meanwhile, the City of London Corporation also possesses a copy of the Magna Carta – although a later one that that issued in 1215.

Issued by King Edward I in 1297, this was the one which saw the document’s clauses, somewhat changed from 1215, written into the statutes for the first time.

Stored at the Guildhall Art Gallery, it is too delicate to be on permanent display but is currently on display in the City of London  Heritage Gallery until 1st October (for more follow this link).