This district in west London – located to the south-west of St Johns Wood – takes its name from the Italian town of Maida in Calabria where, in 1806, the British won a victory over Napoleon.

Led by Sir John Stuart (later Count of Maida), about 5,000 British troops defeated a larger number of French in a battle in what was a much-needed boost to the British after the defeat at Austerlitz in December the previous year. 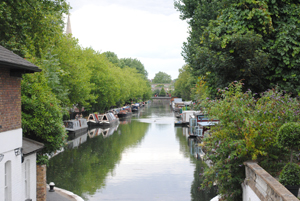 There was apparently a pub located in the area named, in the wake of the victory, ‘The Hero of Maida’ in reference to Stuart and his role in the battle. The pub has since gone but its name lives on in the street and the district which still carries it.

Landmarks in Maida Vale include the basin – complete with houseboats and the puppet theatre barge – known as Little Venice (some say this name was coined by poet Robert Browning; others attribute it to Lord Byron) where Regent’s Canal meets with the Paddington arm of the Grand Junction Canal (pictured is Regent’s Canal looking toward Little Venice).

Maida Vale is also home to the BBC Maida Vale Studios (on Delaware Road) while notable residents have included computer science pioneer Alan Turing who was born at 2 Warrington Crescent in 1912 and David Ben-Gurion, first Prime Minister of Israel, who lived at 75 Warrington Crescent.

The area to the south-west is unofficially known as Maida Hill and this was apparently initially the name used for the entire area until the more romantic Maida Vale came into usage in the mid 19th century. Maida Vale also gives its name to a Tube station – it opened in 1915.