The oldest structure on the Thames foreshore is only a relatively recent discovery. It was in the spring of 2010 that archaeologists found six timber piles driven into the foreshore just in front of the spy agency MI6’s building in Vauxhall (pictured below with the river covering the site). 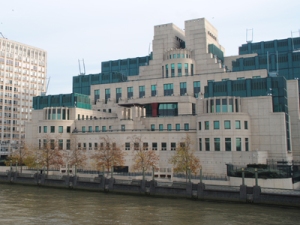 The piles – no specific function for which has yet been identified – were up to 0.3 metres in diameter and were found to be more than 6,000 years old.

That date puts them in the Mesolithic period when the level of the river was lower – meaning the structure was probably built on dry land – and the landscape considerably different to what it is today. Radiocarbon dating suggests the trees for the structure were felled between 4790 BC and 4490 BC.

The site, which is at the confluence of the Thames and now largely underground River Effra, was initially kept secret while surveying was carried out. Nearby were found stone tools dating from a similar era to the piles – they included a tranchet adze for woodworking – and pottery fragments from the slightly later Neolithic era.

The discovery near the low tide line was made by archaeologists from the Thames Discovery Programme and the site then surveyed with the assistance of English Heritage and the Museum of London as well as the geomatics teams from Museum of London Archaeology.