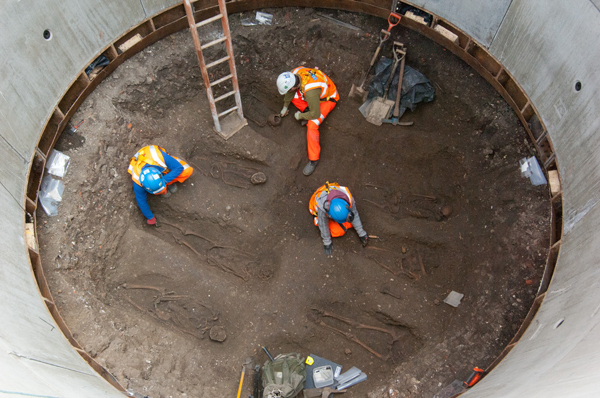 A lost London burial ground has been unearthed in Farringdon by archaeologists working on the £14.8 million Crossrail project.

Thirteen adult skeletons, believed to be up to 660 years old, have been discovered lying in two rows 2.5 metres below the ground on the edge of Charterhouse Square.

It is likely based on the depth at which the bodies were buried and other evidence (including pottery found at the site and a similarity between the layout of the bones and those of 14th century plaque victims unearthed at the East Smithfield Burial Ground in the 1980s), that the skeletons were buried here in 1349 during the Black Death.

Historical records suggest that as many as 50,000 people may have been buried here in the three years from the burial ground’s opening in 1348. The burial ground remained in use until the 1500s but has never been located in modern times.

The skeletons are being excavated and taken to the Museum of London Archaeology for laboratory testing.

“We will be undertaking scientific tests on the skeletons over the coming months to establish their cause of death, whether they were Plague victims from the 14th Century or later London residents, how old they were and perhaps evidence of who they were,” he said.

“However, at this early stage, the depth of burials, the pottery found with the skeletons and the way the skeletons have been set out, all point towards this being part of the  14th century emergency burial ground.”

It is likely more remains will be found according to experts.

Archaeologists working on the Crossrail project have previously uncovered more than 300 burials at the New Cemetery near the site of the Bedlam Hospital at Liverpool Street from the 1500s to 1700s.

For more on Crossrail, see www.crossrail.co.uk.