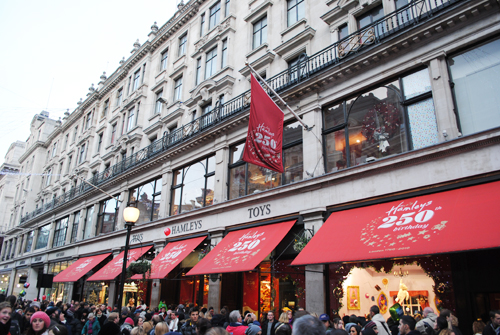 This Regent Street establishment – the oldest and largest toy store in the world – dates back to 1760 when Cornishman William Hamley came to London and founded his toy store – then called ‘Noah’s Ark’ – on High Holborn.

Selling everything from wooden hoops to tin soldiers and rag dolls, the business aimed to capture the trade of affluent Bloomsbury families and proved rather successful, attracting a clientele in the early 19th century which included not only wealthy families but royalty.

Such was its success that in 1881, Hamley’s descendants opened a new branch of the shop at 200 Regent Street. The Holborn store, meanwhile, burned down in 1901 and was subsequently relocated to a larger premises at numbers 86-87 in the same street.

Faced with the Depression in the 1920s, the shop closed briefly in 1931 but was soon reopened by Walter Lines, chairman of Tri-ang Toys, and in 1938 was given a Royal Warrant by Queen Mary, consort of King George V.

The premises at 188-196 Regent Street was bombed five times during the Blitz but the shop (and its tin hat-wearing staff survived). In 1955, having presented a Grand Doll’s Salon and sizeable model railway at the 1951 Festival of Britain, the shop was given a second Royal Warrant – this time by Queen Elizabeth II, who has been given Hamleys toys as a child – as a ‘toys and sports merchant’.

The business, which has passed through several owners since the early 2000s, is now owned by Chinese-based footwear retailer C.banner.  The flagship store is spread over seven floors and tens of thousands of toys on sale, located in various departments.

As well as the Regent Street premises (it moved into the current premises at number 188-196 Regent Street in 1981), Hamlets has some 89 branches located in 23 countries, from India to South Africa. A City of Westminster Green Plaque was placed on the store in February 2010, in honour of the business’s 250th anniversary.

The toy store holds an annual Christmas parade in Regent Street which this year featured a cast of 400 and attracted an estimated 750,000 spectators.