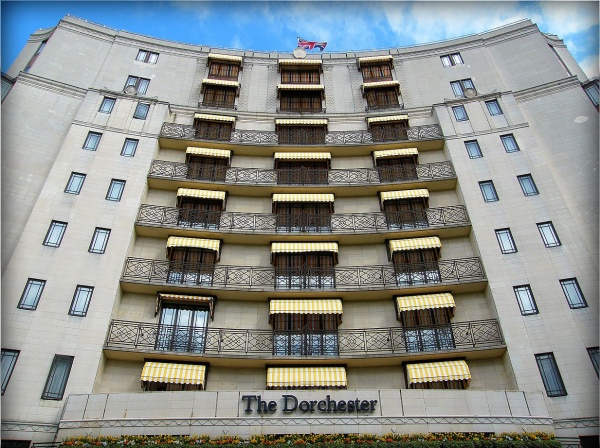 This five star luxury Mayfair hotel opened in 1931 and quickly established a reputation for luxuriousness.

Located at 35 Park Lane on the site of what was formerly the London residence of the Earl of Dorchester (and later a mansion built for millionaire RS Holford), the hotel was the dream of Sir Robert McAlpine who bought the site in partnership with Gordon Hotels in 1929 for £500,000 and vowed to create a luxury hotel that would “rank as the finest in Europe”.

Engineer Sir Owen Williams initially oversaw the building’s design but a falling out saw architect William Curtis Green take over the project (meaning while the structural frame was Sir Owen’s work, the elevations are largely the work of Green). A quarter of the building was constructed underground.

When the 10 storey modernistic building was opened on 18th April, 1931, by Lady Violet Astor, it featured luxurious rooms and suites (with, apparently, the deepest baths of any hotel in London), a ballroom built to accommodate 1,000, an Oriental Restaurant and, of course, the Dorchester Bar (it was here the ‘Dorchester of London’ cocktail was invented).

The Dorchester survived World War II with only minor damage (its basement served as an air-raid shelter). In fact, during World War II, such was the reputation of its reinforced concrete structure, that UK Cabinet members including Lord Halifax stayed here while US General Dwight D Eisenhower planned the D-Day invasion from his suite – now the Eisenhower Suite – during World War II.

In the 1950s, stage set designer Oliver Messel revamped various aspects of the hotel including designing some suites in an extension in Deanery Street (the Oliver Messel Suite is named for him).

The hotel has hosted its share of the rich and famous – Prince Philip hosted his bachelor party in the hotel’s Park Suite on the eve of his wedding to Queen Elizabeth II in 1947 (the Queen, meanwhile, had dined there the day before the engagement was announced), and actors Richard Burton and Elizabeth Taylor used the hotel as something of a “second home”.

The hotel was completely renovated between 1988 and 1990 and was again refurbished in 2002.

Facilities today at the hotel – alongside the 250 rooms and suites – include numerous restaurants and bars such as the three Michelin star Alain Ducasse at The Dorchester, China Tang, The Spatisserie and The Grill at the Dorchester, as well as The Bar at the Dorchester and The Promenade where afternoon tea is served. There’s also a spa.

Today The Dorchester is the flagship of the Dorchester Collection of hotels which also includes 45 Park Lane, Cowarth Park in Ascot, The Beverly Hills Hotel and The Hotel Bel-Air in LA, the Hotel Eden in Rome, Le Meurice and Hotel Plaza Athenee in Paris and the Hotel Principe di Savoia in Milan.

Out the front of the hotel is a London Plane tree which was named one of the “great trees of London” in 1997.