The Olympics kick off in Rio de Janeiro this week, so we thought it a good occasion to recall a Londoner intimately associated with the Olympics, though not as an athlete but as a coach. 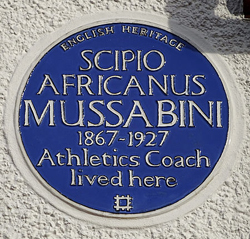 Mussabini, the son of a Syrian-Italian father and French mother, was educated in France and worked, like his father, in journalism, writing for sports magazines and specialising in billiards (which he also played to a high standard).

From the 1890s, he started working, first as a cycling coach and later as an athletics coach in south London, based at Herne Hill Stadium.

His first major success as the latter came when young South African sprinter, Reggie Walker, won gold in the 100 metres at the 1908 London Olympics. In 1913, he was appointed coach of the Polytechnic Harriers at the Herne Hill athletics track.

He would go on to train the likes of Albert Hill – he won gold in the 800 and 1,500 metres at the 1920 Olympics in Antwerp – and his most famous student Harold Abrahams who won gold in the 100 metres and silver in the 4 x 100 metre relay at the 1924 Paris Olympics – a role which is depicted in the 1981 film Chariots of Fire (the coach is played by Ian Holm).

Mussabini is famous for the comprehensive and systematic approach he took to training his athletes, an approach which covered the athletes’ lifestyle and diet as well as a rigorous training regime, and which saw him use techniques such as using a cine-camera t0 film his athletes in action and then analysing the footage. He is also noted for having ensured female athletes, like world record sprinter Vera Palmer-Searle, received high quality coaching.

As a paid coach in an age when most were amateurs, he was ostracised by the establishment and apparently only started to receive the recognition he deserved well after his death, particularly following his depiction in Chariots of Fire.

Mussabini, who suffered from diabetes, died in March, 1927, at the age of 60. He was buried in Hampstead Cemetery. There is an English Heritage blue plaque on the house he lived in at 84 Burbage Road (it backs onto the Herne Hill Stadium) between 1911 and 1916.

Mussabini was inducted into the English Athletics Hall of Fame in 2011 while the Mussabini Medal was awarded every year between 1998 and 2007 by Sports Coach UK to honour outstanding coaches.

In honor of the Olympics, we’re staying with a sporting theme over the next couple of weeks and so this week thought we’d take a look at the oldest sports museum in London – and, it is claimed, the world. 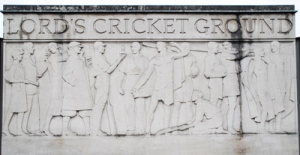 The Marylebone Cricket Club (MCC) Museum is located at Lord’s Cricket Ground in St John’s Wood, just north-west of the City (keep an eye out for our post on Lord’s later this week), and is said to have been collecting cricket-related artefacts since as far back as 1864.

The star sight on display is that tiny urn, known simply as The Ashes, which was given to English captain Ivo Bligh during the English cricket team’s visit to Australia following a game on an estate outside Melbourne on Christmas Eve 1882 (the term was actually first used in August that year when, following an English loss to Australia, at The Oval, The Sporting Times ran an obituary for English cricket and said its ashes would be taken to Australia).

The museum also contains cricket equipment used by some of the game’s greats along with memorabilia celebrating the likes of WG Grace, Victor Trumper, Jack Hobbs, and Donald Bradman as well as more recent players Shane Warne, Rahul Dravid and Paul Collingwood. Other exhibits include the Wisden Trophy, a stuffed sparrow bowled out by Jehangir Khan in 1936 and the battered copy of Wisden’s which EW Swanton used to help him survive a World War II Japanese internment camp.

There is also an extensive collection of cricket-related paintings and photography and a theatre – the Brian Johnson Memorial Theatre – which screens archival cricket footage.

It should be noted that the museum is closed during the Olympics (until 15th August) when Lord’s is playing host to the archery competition (people attending the archery, however, will have free entry). In celebration of the archery, the museum is hosting an exhibition of trophies and pictures related to archery, the centrepiece of which is an arrangement featuring the Musselburgh Arrow and Medals, prizes which have been competed for since 1603.

For many Londoners, an opportunity to see the Queen means heading to Buckingham Palace to watch her wave from the balcony – or standing in the Mall to watch as her carriage goes by. 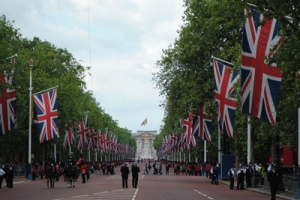 Given that, we thought we’d take the time to have a quick look at the history of The Mall, an important player in events like the annual Trooping the Colour.

This one kilometre long grand processional route which links Trafalgar Square to Buckingham Palace, was originally cut through St James’s Park in 1660 when King Charles II was looking for a new paille-maille pitch (see our earlier entry on Pall Mall for more on this). Two long avenues of trees were planted on either side, giving it a leafy feel that’s still in evidence today.

The Mall had become notorious by the 18th century and was spruced up in 1911 under the eye of Sir Aston Webb (who also designed other elements in the area including a new facade for Buckingham Palace, the Queen Victoria Memorial in front of the palace, and Admiralty Arch at the western end of the route) to become the grand avenue, complete with red-carpet like surface (this was done later), that it is today.

It is bordered by St James’s Park on the south side and on the north side is overlooked by various grand buildings – including Clarence House and the Institute of Contemporary Arts – as well as, toward the western end, Green Park.

These days the Queen publicly processes down The Mall for a number of events throughout the year – among them are the State Opening of Parliament (held earlier this month) as well as military ceremonies like Trooping the Colour and events like last year’s Royal Wedding when is it said that more than a million people were said to have filled the broad street.

The Mall is also the route along which Heads of State process in a horse drawn carriage during official visits (the road is then decorated with Union Jacks and flags of the visitor’s country). During the Olympics, it will be the start and end location of the marathons and cycling road races.

Apart from the Queen Victoria Memorial at the eastern end of The Mall, statues and monuments lining the road include the Queen Mother Memorial, a statue of explorer Captain James Cook, and a recently installed statue of cosmonaut, Yuri Gagarin.

There are apparently a series of tunnels underneath with link Buckingham Palace with Whitehall.

We should also briefly mention Horseguards, which is at The Mall’s eastern end and where Trooping the Colour and Beating Retreat takes place. This was formerly the site of a tiltyard of the Palace of Whitehall and jousting tournaments were held here during the time of King Henry VIII. It has been used for parades and ceremonies since the 17th century. While cars were parked here for much of the 20th century, this practice was stopped in the mid-1990s.

Princess Elizabeth and Prince Philip were married at Westminster Abbey, a highly significant property in the Queen’s story which we’ll be looking at in more depth shortly, on 20th November, 1947 (and, as did other brides in post-war Britain, the princess had to collect coupons for her wedding dress). 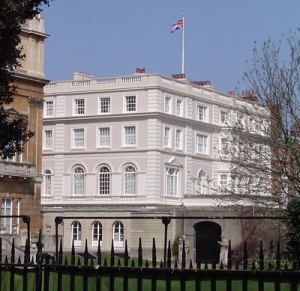 Following their honeymoon at Broadland – the home of Lord Mountbatten in Hampshire and at Birkhall, Balmoral, in Scotland, in 1949, they and their baby son, Charles, moved into Clarence House, their home for the next three years.

The house, which still featured Victorian decor, was refurbished although post-war austerity ensured the decor and furnishings – many of which were wedding presents – remained simple. The house still contains a Georgian dining table and 20 ladder-back chairs which were the gift of the Royal Warrant Holders Association and a mahogany sideboard and four side tables which were a present from Queen Mary, the Queen’s grandmother.

Princess Anne, second child of the Queen and Prince Philip, was born in the house in 1950.

Clarence House was originally built between 1825 and 1827 to the designs of John Nash (he also designed Buckingham Palace) and was designed as the home of George III’s third son, Prince William Henry, Duke of Clarence and his wife Adelaide, and incorporated some of the Tudor buildings of St James’ Palace.

Indeed, Prince William Henry liked the house so much that on succeeding to the throne as King William IV in 1830, he decided not to move to Buckingham Palace and instead remained at Clarence House.

Later occupants have included Queen Victoria’s mother, the Duchess of Kent, and two of her sons, Prince Alfred, Duke of Edinburgh, and Prince Arthur, Duke of Connaught as well as Queen Elizabeth, the Queen Mother, who moved in after the property was vacated by Queen Elizabeth II and remained living at the house until her death in 2002.

Today Clarence House is the official London residence of Prince Charles, Prince of Wales, and his wife Camilla, the Duchess of Cornwall, as well as Prince Harry.

Clarence House is usually open for tours during summer but will not be opening this summer due to the Paralympic and Olympic Games blocking the entrance from The Mall. For details on the 2013 opening, see www.royalcollection.org.uk/visit/clarencehouse.